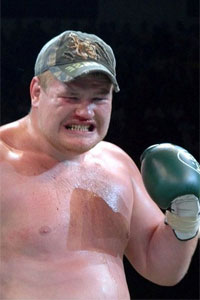 You could live for the next ten thousand years, travel the earth barefoot, climb the highest mountain and master every religion on this planet and you will not find a single reason why this story of Vyacheslav Datsik can not be classified as ‘baller’. If God truly exists, then Datsik undoubtedly bullied him in highschool. Stolen lunch money, sporadic wedgies at recess, The Almighty had it hard back in those days and all fingers should be pointed in Vyacheslav Datsik’s general direction.

In Pankration, Datsik faced off against Vitali Shkraba where he repeatedly kicked and stomped on his testicles as Shkraba rolled around in pain. The referee had to restrain Datsik with a forearm choke that nearly killed him. After losing his last six fights, his former training partner and alleged gay lover, Oleg Titov, spread rumors that Datsik died in a train wreck. The rumors were deemed false when St. Petersburg police arrested Viacheslav Datsik for a string of robberies at mobile phone stores across Russia. Since 2007, Datsik has been incarcerated in a high security psychiatric clinic but was transferred to a low-security facility last month. According to Russia’s Fontanka News, Vyacheslav Datsik escaped the psychiatric ward last Saturday using his bare hands.

“He tore a hole in a chain-link fence with his bare hands and fled. We immediately informed police about his escape”

The next day, a St. Petersburg mobile phone store notified the police that someone raided the store and made off with 7000 rubles and a Nokia phone. When the police arrived, a salesman identified the phone thief as none other than your boy, Viacheslav Datsik. The guy is too raw for humanity and if, in the infinite possibilities of this vast universe, he somehow makes it on the next season of The Ultimate Fighter, I would raid a string of mobile phone stores in Datsik’s honor (and you should too). [Source]

Check out the FIRST pictures of Cowboys Stadium in EA Sports MMA
← Read Last Post
Finally, the fight we've all been waiting for: Bobby Lashley vs. Michael Bisping
Read Next Post →
Click here to cancel reply.