Vitor out with an injury, Cung Le vs. Wanderlei Silva set for UFC 139

Look at that mug, tangible evidence of your visceral fear that one day you will be on the opposite end of a cage with a Brazilian that is known world-wide as ‘The Axe Murderer.’ The damage he inflicts on human beings is so thorough and violent, that the only description one could attain is to compare the damage to that of a killer wielding a heavy, sharp blade. He will extract blood from your torso, regardless if you’ve given him permission and fortunately for all of us normal humans out there, we won’t have to worry about him knocking on our door and demanding our soul on November 19, 2011. Leave that to UFC newcomer, Cung Le.

Dana White just announced that Vitor Belfort is indeed out with an injury, and Wanderlei Silva has stepped up to replace him. UFC 139, San Jose. Be there or forever burn in the firey pits of whatever Josh Barnett talks about. [Source] 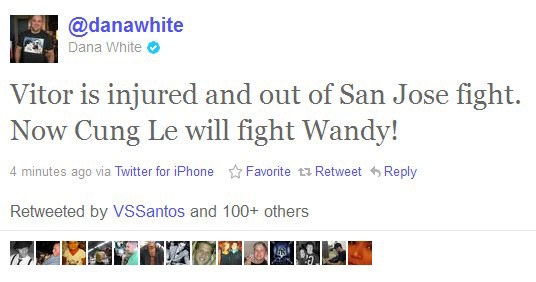 If eight-years-old is too young for MMA, then tell that to the people of Lancashire, England
Read Next Post →
Click here to cancel reply.