Vitor Belfort pulls out of his fight with Yushin Okami, bummer 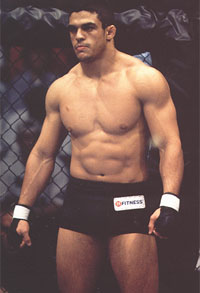 I’m starting to wonder if Vitor Belfort drinks out of the same water fountain as Erin Toughill. There are very few fighters I would rather see in action in their respective divisions than these two, yet the injury bug seems to come around and bite them weeks from their fights. The message is loud and clear that the MMA world needs injury-bug repellent. Every gym would order cases of this stuff and put a spray-bottle in every fighter’s locker.

We were on a roll with good news today and I guess it couldn’t last forever. As much as I would like to tell you all is well in the world and Vitor Belfort will fight Yushin Okami at UFC 122, I’m not going to sugar-coat it (besides, sugar is fattening, we’ve switched to Stevia as our official sugar substitute). Vitor Belfort pulls out of more fights than I insert clever references to tacos in these articles. Unfortunately, his fight with Yushin Okami will be no different than his last scheduled appearance against Anderson Silva at UFC 112. MMAWeekly just broke the story that Vitor has sustained an unknown injury and that the UFC has already slated Nate ‘The Great’ Marquardt to fill in for the ‘Phenom’.

Between Chael Sonnen’s affinity for testosterone supplements and Vitor’s mystery injury, the number one middleweight contender spot is about as confusing as a Rubix cube with faces of evil historical dictators on all six sides. Right when you think you’ve aligned Mussolini and Hitler on 2 sides, Stalin comes and messes everything up. I’ve stared at this thing so long, Saddam Hussein’s face is starting to look like Kimbo Slice with a solid shape-up. [Source]