Phoenix, Arizona’s own John Moraga won one for the good guys during the UFC 216 Fight Pass prelims.

Moraga was a huge underdog versus Russian uber prospect Magomed Khasanovich Bibulatov. Bibulatov comes from the infamous Chechen MMA camp Akhmat. Akhmat MMA is of course the pet project of president/brutal dictator Ramzan Kadyrov, and having Bibulatov fighting in the UFC was an important badge of prestige for the Chechen dictator. They had hopes he won content for a UFC title one day.

Bibulatov entered the fight 14-0 with hype of him challenging the upper ranks of 125 sooner than later.

John Moraga was having none of that.

After a 0-3 skid that lasted over two years, John Moraga has rebounded winning his last two. At 33 years of age, he cements his place as part of the top fifteen of the division. 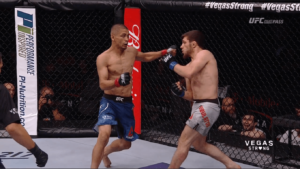