Video: Michael Bisping Continues to Be the Biggest Ass on Television

Michael Bisping’s history of being an ass is long and storied. Since taking over regular analyst duties for Fox Sports 1, Bisping has become the clear anti-hero of the broadcast. Michael Bisping has the incredible skill of making everything he says seem whiny and defensive. It’s beyond absurd that a man so accomplished in fighting comes off as so insecure when in an argument.

Watch Bisping babble all over guest analyst Michelle Waterson while she’s speaking. It’s gross. This must be embarrassing for Michael Bisping’s family.

"It's not open for debate. The chin has to be tucked in!" — @bisping on @gunninelson (and shade at @karynbryant?) 😂 https://t.co/tTMedZoez7

This look from Karen Bryant sums up what it must be like to work with this prick regularly. 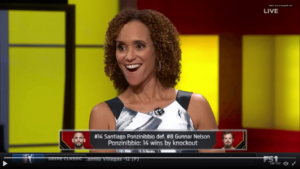 For whatever reason, Michael Bisping will continue to be an FS1 analyst until the channel loses the right to broadcast the UFC. These Republican-owned channels can only imagine people arguing about sports, not talking about them. So Michael “The Count” Bisping will ‘that guy’ for the UFC for the foreseeable future. Joy.

Here’s a GIF of the spinning strikes thrown by Cynthia Calvillo and Joanne Calderwood at the same time
Read Next Post →
Click here to cancel reply.