Video: GGG is the only boxer worth caring about

Okay, let’s put this out there first.  I know Middle Easy isn’t the place for boxing.  Why?  Because mostly boxing is as boring as a Jared Rosholt fight.

But there are a few redeeming qualities possessed by boxing, and I will list them here:

1.) You get to bring a massive crew to the ring.

2.) There are awesome walk out outfits. 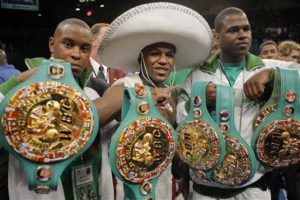 which brings me to my next point…

4.) Dudes are still getting knocked the fuck out.

And finally the most important redeeming factor for boxing…

If you still aren’t sold on the dopest thing to come out of Kazakhstan since Borat, hopefully these highlights will.

If that isn’t enough, watch GGG be all Russian, scary, and yet adorable: