To be fair, he seemed to ask her to do it.

There seems to be a percentage of MMA fans that will, no matter how much evidence is presented to them, insist small fighters ain’t shit. These people tend to have an inflated sense of their own physical capabilities, and perhaps an untested bravado. They are the type of person that asks 115-pound UFC fighters to punch them. It’s not enough for them to make a passing comment, they insist enough that the fighter provides a waiver. Let’s rewind that one back. Carla Esparza has enough random requests to be punched in the face that she knows to have a few copies of a waiver in her purse. That’s not a normal life.

But back to this asshole that demanded a former UFC champ he met at a bar punch him in the face. Here’s a quick video of him asking to get a “2 out of 10″…

I’ve isolated the exact moment where he realized that he could have fucked up, if he’d said 6 of 10. 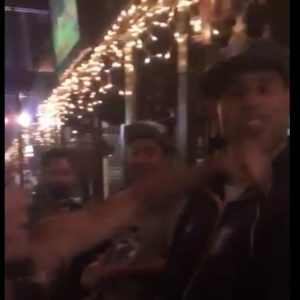 Guys, free advice from your boys here at Middle Easy. Don’t sign waivers and encourage people to punch you in the face. You’re only ever taking an L there.