Seems recently MMA fighters are out to prove that they are the world’s best Dads. First, Anderson Silva walked out to his son’s song for UFC 208, last night in Auckland Mark Hunt had his sons hanging around during his in cage interview, and now it seems like Long Island’s own All-American wants to get in on the Best Dad act. Check out the former Middleweight champs surprise for his son C.J.’s birthday.

First of all before we get into how awesome that was, what’s up with Weidman’s kid? He can’t keep up kayfabe? I know he’s probably only 6 or 8 years old, but come on. You gotta work with the show. Telling everyone “that’s Daddy, that’s Daddy”. Way to break the fourth wall, kid. Don’t be a rube. I don’t mean to pick on him, but if you’re gonna be kid in this industry, you gotta learn early.

But how incredible is this? Weidman’s commitment to the Warrior gimmick is clutch, if a bit over reliant on calling for the shoulder press without delivering. Gian Villante as Hulk Hogan is just a masterful performance. He handled the wardrobe malfunction with the savvy of the Bravo stage veteran that he is. It really is amazing that you can hear his Long Island accent through his Hulk Hogan impression. Just amazing.

And props to both fellas for the bumps. The action looked pretty well worked despite the lack of a proper ring. In fact, some of those punches Weidman threw on Villante looked like a straight shoot, brother. I can only imagine that as this clip ends the wrestling just continues, with each guy getting progressively more serious. After a while, the match has devolved into live sparring. Finally, the day ends with Weidman’s son crying in the corner, eating cake as Weidman has to drive Gian to the ER to get stitches. 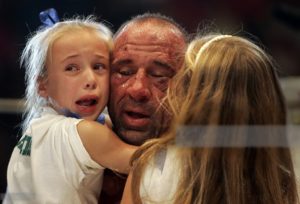