Marvin Vettori Says Paulo Costa Wasn’t Out Of Shape: ‘It Was A Trap A Little Bit’

Marvin Vettori believes he was almost lured into a trap by Paulo Costa.

Vettori outpointed Costa over five rounds in their light heavyweight headliner at UFC Vegas 41 last night. It was a back-and-forth contest that saw both fighters have their moments.

In the end, even with Costa getting a point deducted in the second round for an accidental eye poke, Vettori came out on top with all three judges scoring it 48-46 in his favor.

Of course, this fight was supposed to be at middleweight only for Costa to make headlines earlier in the week about how he was overweight and wouldn’t be able to make 186 pounds. Costa later stated that the reason was a bicep injury during camp which prevented him from training for a couple of weeks.

Many observers felt Costa didn’t want to fight and wouldn’t be ready or in shape with the contest being moved up to 205. However, that was far from the case going by the Brazilian’s performance, and Vettori is glad he didn’t get lured into believing otherwise.

“It was a very solid performance,” Vettori said of his performance at the post-fight news conference. “I’m glad I didn’t let go of all that tension before the fight thinking that he’s not ready, he didn’t train, he came in fat, he’s not taking it seriously because he actually did. It was a trap a little bit, I think.

“He was willing to scratch the fight, that’s for sure, but he was ready also.”

Marvin Vettori (190) and Paulo Costa (163) combined for 353 significant strikes landed, the 4th largest count in UFC history and the largest count ever not featuring Max Holloway, per UFC Stats. pic.twitter.com/41iyC39KcY

Although Costa appeared to be gassed out at many points in the fight, he was still able to finish strongly with a good fifth round, further showcasing why Vettori was right to take him seriously despite the events of the last few days.

“In my head, this guy wants out of the fight because he’s not ready,” he added. “My rational mind was saying, ‘You can’t think that way because it could all be a f*cking trap.’ I can definitely see that he was willing to scratch the fight, because I don’t think a lot of people would have taken this at a higher weight, but at the same time if I do accept, I’m all in. I can’t expect him to not be ready. So it was weird on my side, too, because I had to stay completely focused, even on him making all this sh*t where it kind of looked like he wasn’t ready.

“I had people all the time telling me, ‘He’s not ready, he wants out of the fight, he doesn’t want to be here.’ You saw the performance, he came game. He wasn’t out of shape or nothing.”

You can watch Vettori’s full press conference below: 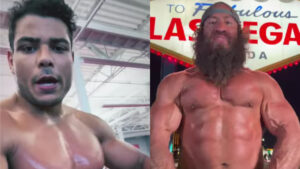