Joanna in blue gloves, Valentina in red. The match starts!

Great Trip Shevchenko, Ends Up In The Side Control Position.

Shevchenko controls the fight of the top. What an elbow! Oh, Joanna stands up, but eats a knee. Great match, now Shevchenko pushes her on the cage.

Now Joanna holds the rival on the fence, short elbow. Another knee by Jedrzejczyk. Shevchenko goes for the trip but misses, she controls her rival effectively.

Knee and elbow Joanna. Valentina pushes her against the cage again. Short knees on both sides. What a right hand by Shevchenko. The fighters separate.

Right low kick miss Joanna. Good right hand Jedrzejczyk but she misses right high kick too. What a left side kick by Valentina Shevchenko, what a counter! Good body kick Joanna, but Shevchenko counters with a left hand. Great first round, I think Shevchenko won this one.

Right middle kick Joanna, but Shevchenko caught her leg and took her down.

Fighters stood up, but again world-class slam by Valentina, Joanna ended up on her back.

Valentina again in the side control position. She tries to trap Joanna’s left hand. “JJ” defends like a pro, left elbow Valentina. Joanna’s head is pressed against the cage. Wow, Joanna stands up, but a great left knee to the head by Shevchenko.

Another Takedown by Valentina!!!

The end of the round, I’d say Valentina won this one too!

Wow, what a left spinning back kick counter by “The Bullet”.

Right front kick miss from Joanna again. Valentina misses with a spinning heel kick. Joanna tries middle kick but Valentina grabs Joanna’s leg and takes her down but the fighters instantly stood up. Joanna bleeds from the nose!

Few good kicks. Wow, what an axe kick by Jedrzejczyk! Great fight from Joanna, she hits like a pro and wakes up. Middle kick Joanna. Body shot Joanna. Kick misses on both sides, and the fighters clinched up. Right knee to the head Valentina.

Left body kick and left hand Valentina, what a combo. Spinning technique miss by the Peruvian. Right oblique kick Joanna. What a combo by Valentina, fighters opened up now!!

Right front kick misses Joanna, Valentina wraps hands around her waist and pushes her against the cage. Right knee to the head from Valentina, the end of the round. I am unsure who won this one.

Another side control position for the Peruvian. She transit to the other side now. Joanna stood up again but Valentina pressed her against the cage. Short knees from Joanna, but a great left knee to the head Shevchenko. She controls the position, her hands are under Joanna’s. Good defense from Jedrzejczyk.

Right low kick miss Valentina. Fighters exchange punches, and great body kick Joanna. “JJ” misses a front kick to the body. Fighters throwing jabs, and clinch up again, Joanna ends up on the floor but gets up immediately. Fighters in the clinch again, Valentina pushes her against the fence, controlling position.

Short punches from “JJ”, the referee warns Valentina for inactivity. And the referee breaks them up. Right punch to the head, Joanna. Wow, what an exchange on both sides!

Shevchenko controls the position again, attacks Joanna’s leg. They separate again, Joanna with a good left hand to the head, spinning back kick Shevchenko, Joanna again attacks. But what a spinning technique to counter “JJ”, and now both fighters are in the clinch. The match is finished, what a great fight! Let’s see who won! I am unsure of this round too.

First takedown of the bout.

Does @BulletValentina have the advantage on the ground? #UFC231 pic.twitter.com/ddOUGrjHV2 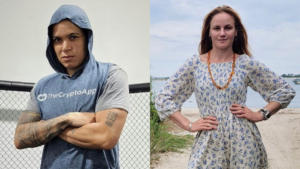 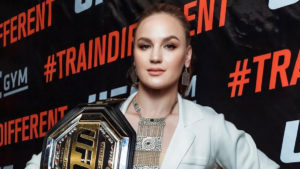 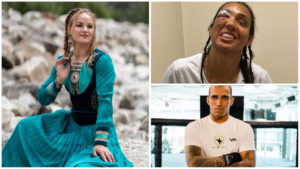