A dream Bellator debut for Usman Nurmagomedov, who put on a striking clinic against Mike Hamel to pick up the unanimous decision. 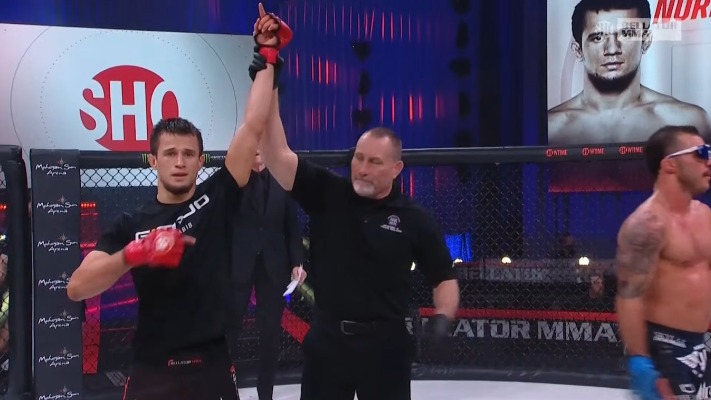 The younger cousin of Khabib, Usman Nurmagomedov is set to make his Bellator debut against the always game Mike Hamel. Hamel is coming off an exciting short notice split decision loss to Adam Borics. His spirited performance has set him up for a fight with one of the most exciting upcoming fighters in modern MMA.

Nurmagomedov using his length early on to throw kicks from range. He lands a spinning back fist on the body. Hamel is attempting to close the distance but is getting hit by straight shots each time. Usman blitz’s forward with a barrage of punches throws a head kick and slips to the floor. He gets back to this feet and continues the fight from the outside.

Hamel lands a heavy low calf kick early on. Hamel shoots for a takedown and is able to get Usman to the ground for a second, but then he’s right back up. Nurmagomeov lands a straight then throws a step-in knee which connects. Nurmagomedov’s jab is really giving Hamel trouble. Hamel now has a cut on his face. Hamel looking visibly fatigued.

A step in elbow lands early for Nurmagomeodv. Hamel shoots for a takedown and gets Usman to the ground. However, Nurmagomedov is back to his feet quickly. A jab straight knocks Hamel’s mouthpiece out. Nurmagomedov lands a teap to the body, then presses forwards with a blitz. Hamel lands another takedown and gets the back. Once again, Nurmagomedov gets back to his feet. Hamel still relentlessly pressing forward but keeps getting countered with straight shots as he steps in. Hamel attempts a flying knee as the round comes to an end.

So @Nmgmdv and Mike Hamel go the distance on the #Bellator255 main card.

Cool and calm from @Nmgmdv. Pulling out a spin kick like it's nothing 👀#Bellator255 is LIVE & FREE on @SHOsports. pic.twitter.com/aGtpt4ehql

🦵💥 @Nmgmdv showed up with some serious kicks in round 1️⃣ of his #Bellator debut tonight.