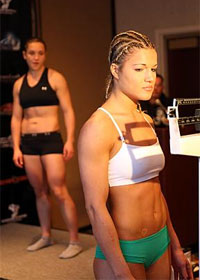 I can’t think of any point in history where seeing hot chicks in tight shorts mount each other is a bad thing. I can’t envision a world in which a television audience would see two hot chicks in a cage…and then decide to go with Gilmore Girls for the win. Gilmore Girls should never be followed by ‘win’…ever. I apologize. That’s like someone saying ‘Want a Chicken McNugget?’ followed by ‘Nah, I’ll pass’. The Chicken McNugget in this case is NBC’s new reality show ‘Ultimate Women’s Combat’ which is scheduled to premiere sometime late in 2009 or early in 2010 (2010…where’s my hoverboard? Answer me Mattel).

In NBC’s latest press release, the lineup of fighters are pretty impressive. Felice Herrig, Angela Magana, Angela Hayes, Melissa Steele, Roxy Richardson, Lauren Sugahara (woah!), Kerry Vera, Michelle Vera, Marloes Coenen, Casey Noland, Molly Helsel, Vanessa Mariscal, Jessica Aguilar, Martha Benavides, and Kate McGray. What’s even more impressive is that Bas Rutten is going to host the show with Joanna Krupa. Coaches are going to be Cyborg, Rosi Sexton, Tara LaRosa and your boy Caesar Gracie. Hopefully, Michelle Waterson will get thrown in there for the ‘my head just exploded out of excitement’ reaction from the male (and lesbian) audience. Two chicks will be chosen to fight every week (TUF style) with the remaining two chicks (maybe 4 if they believe in weight classes) will have a shot at obtaining a contract on a partnered fighting organization (rumored to be Strikeforce). The press release was a few weeks ago, but the reason why I’m telling you guys now is because a source (some chick I used to do beer bongs with in college) that works on set called me to let me know that the show has started production. Nice. Very nice. [Source] 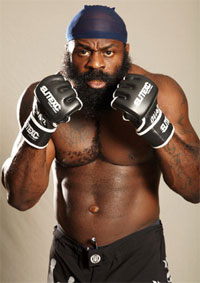 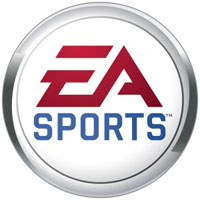