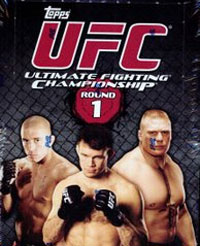 When I was eight, some idiot that lived down the street borrowed my complete collection of Marvel Universe Cards – Series I. When he gave it back, I nearly collapsed on the playground after I saw my Silver Surfer hologram had a giant crease down the center. I later met Micheal Bartolinni later that day and I rushed him and caught him flush on the temple with a titanic right hand – he was out cold, convulsing on the floor like an infantile retard. Part of that childhood memory actually belongs to Mike Tyson…I’ll let you guess which part it was.

Now the UFC has found another way to make us drop hundreds on MMA schwag…and the scary part is we can’t do anything about it. We’re hooked much like my friend Tyler who refuses to order anything from a restaurant other than chicken fingers. It cost the dude his relationship with his girlfriend. Apparently she didn’t understand the complexities that comes with a dude obsessed with chicken fingers. Maybe she’s the one who’s missing out.

The point of all of this is to break the news that UFC has announced a trading card collection produced by Topps which will be available later this year. The release date has been pushed back to September 21st to include all sixteen members of the TUF 10 cast (War Justin Wren!). Of course this really means that come September, you will have to find another excuse to pay your friend back for that cheap Guitar Hero drum set you broke Friday night (sorry Mike). [Source]