UFC’s Jessica Eye tested positive for a banned substance, but can STILL fight at UFC 170

I’ve made all my jokes about this Jessica Eye situation on Twitter, but I’m fairly certain I can replicate them on MiddleEasy and no one will notice. I mean let’s face it, with this entire ordeal there’s more than meets the eye.

Over the weekend there was a rumor floating around that Jessica Eye tested positive for a banned substance after her UFC 166 win over Sarah Kaufman. A few sites ran with the report, and it was subsequently shot down by Jessica Eye in this YouTube video.

However with rumors, they sort of linger around like a long-forgotten parking ticket. According to Bleacher Report, due to a positive result of a banned substance, the result of the fight was actually changed to a ‘no contest’ on January 22nd which also serves as the first day of her suspension.

There, we have all the evidence to call Jessica Eye the first female UFC fighter to test for a banned substance, so naturally she’s out on a year suspension. Well, not according to Jessica Eye.

I know what you’re thinking. If it’s been confirmed by the Texas commission that Eye tested for a banned substance, how can she possibly fight during her suspension at UFC 170? Well this is where it gets weird. Texas hands out what’s known as a ‘fully probated suspension’ which essentially means that she’s more on probation than an actual suspension. Essentially it means she must take mandatory drug tests throughout the year, and if she actually tests positive for anything, her license will get snatched up for a year, which will be retroactive to January 22nd 2014.

Great, I’m glad all of that made sense for you. I’m happy we can meet eye-to-eye on this ordeal. 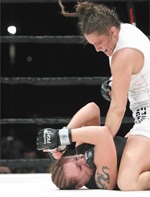 Pat Barry has joined GLORY Kickboxing, but his next fight is actually against this guy...
Read Next Post →
Click here to cancel reply.