UFC on Versus adds Buentello vs. Kongo in an attempt to make your TV explode 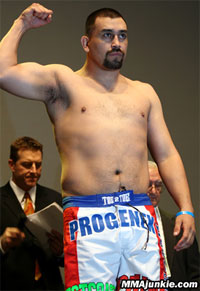 If I were that guy from Quantum Leap, the last place I would want to transport to was the body of Kirill ‘Baby Fedor’ Sidelnikov on January 24th 2009. It was like the government closed down three-mile island and authorized Sidelnikov’s face to be an atomic bomb testing site. To Kirill’s credit, dude did not go down a single time after withstanding the onslaught of Paul Buentello’s typhoon of straight jabs and right hooks. The dude is named ‘The Headhunter’ for a reason. He launched shots that would have easily paralyzed the normal human being, but anyone that trains with Fedor doesn’t exactly have the same genetic code as all of us. Just after that fight, ‘Baby Fedor’ tested positive for anabolic steroids and he’s still serving his suspension which lasts until next year. Bummer.

Now it’s being reported that the UFC has added Cheick Kongo vs. Paul Buentello to their UFC on Versus card. Apparently, ZUFFA is trying to create a small impact crater on the face of Colorado on March 21st. So far we have Junior Dos Santos vs. Gonzaga, Bones Jones vs. Vera, Doomsday Howard vs. Rumble Johnson, Clay Guida versus…somebody, Spencer Fisher vs. Duane Ludwig and James Irvin vs. Alessio Sakara. The greatest thing about this is, if you have DirecTV all of this will mean absolutely nothing to you on March 21st. You’re better off taking a trip to Cold Stone Creamery by yourself. However, if you’re fortunate to have Versus on your satellite/cable plan, don’t get too close to the TV. You may catch a little rawesomite shrapnel around your eyes (and it’s really hard to get out). [Source]