UFC On Fox 28 Watched By More Than Two Million Viewers, Peaking At 2.73 Million 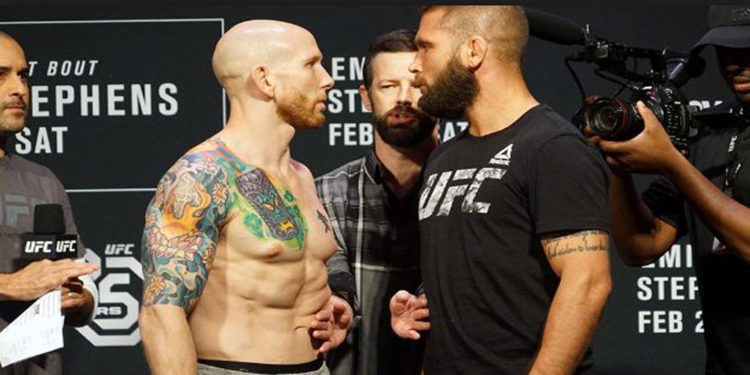 UFC On Fox 28 was more successful than it was initially expected. The main event of the evening, Josh Emmett vs Jeremy Stephens, was thought to lead to the minimal viewership on Saturday night.

However, the final results of viewership are far from a catastrophe. The average viewership is more than 2,037,000 viewers and a 0.6 rating in the 18-49 demographic. UFC On Fox 27, for example, had an average of only 1,770,000 viewers, despite two other ratios remained the same.

The main fight of the evening earned so many viewers due to the controversial victory of Jeremy Stephens over Josh Emmett. The rules were clearly broken – a knee to the head of the downed opponent, and two illegal elbows on the ground, alongside the referee who claimed he didn’t see anything.

This is the fourth least watched show in UFC history. It marked the first-ever February event on big FOX too. But surprisingly, on Saturday night, UFC On Fox 28 went up against the NBA on ABC. And it also competed against the Winter Olympics on NBC! The competition was tough, that’s for sure.

The main UFC On Fox 28 fight card was also preempted for some different programming in San Francisco Bay Area. It led to pushing the main card to KTVU-plus, which is the secondary channel for that region’s local Fox affiliate. In Miami/Fort Lauderdale, the prelims on FOX were not shown. However, an average score was more than 1.2 million viewers.

Dave Meltzer has some additional details related to streamers and FOX apps: (quoted by Bloodyelbow.com):

“With one of the biggest markets in the country not airing the main show on television, and two not airing the prelims, one would have expected a huge rise in streaming viewers.

In fact, that didn’t happen. The main card averaged 11,067 viewers streaming per minute through Fox Sports Go and Fox Now. That’s up from 10,694 for the Souza vs. Brunson show, or barely a blip. It’s also down from 15,521 from the Dec. 16 show headlined by Rafael dos Anjos vs. Robbie Lawler.

That makes a major statement about the UFC television audience in 2018, and their willingness to watch a show via streaming when it isn’t airing on television.”

The UFC On Fox 29 will be held on 14th April. In the main event of the evening, Justin Gaethje and Dustin Poirier will be the opponents. Five rounds of total war are expected. The year 2018 is the final one when it comes to UFC’s broadcasting contract with Fox. What do you think, will UFC On Fox 29 overcome not really a great result of UFC On Fox 28?

Dan Miragliotta – UFC Referee You Don’t Want To Mess With!

Carlos Condit: ‘I Love What I Do, But Maybe My Time Has Passed’