UFC 254 fell very short of expectations when it came to the pay-per-view buy numbers.

The event took place this past weekend and was headlined by a lightweight title unification clash between Khabib Nurmagomedov and Justin Gaethje.

It was promoted as the biggest fight as well as biggest event of the year especially with Nurmagomedov now being a major star and draw for the promotion. UFC president Dana White even claimed during fight week that it was trending higher than a Conor McGregor fight — which includes the 2.4 million buys he helped sell for his fight with Nurmagomedov at UFC 229.

“This thing is trending off the charts for us right now,” White said. “So, today is Tuesday and on Monday, this thing was trending to be the biggest fight we have ever had. Not Thursday, not Friday, Monday.”

“It is trending bigger than that right now. Will the trend hold? One of the things that is a big negative for us is that it is not in primetime at home and it is hard to message that to people.”

The primetime factor played a role in the end as according to Sports Business Journal, the event drew 675,000 buys with 500,000 buys coming in the U.S. on ESPN+.

That puts it at number five on the highest selling pay-per-views of 2020. Jorge Masvidal’s meeting with Kamaru Usman at UFC 251 is still number one with 1.3 million buys followed by Conor McGregor vs. Donald Cerrone at UFC 246 which drew 1 million buys. 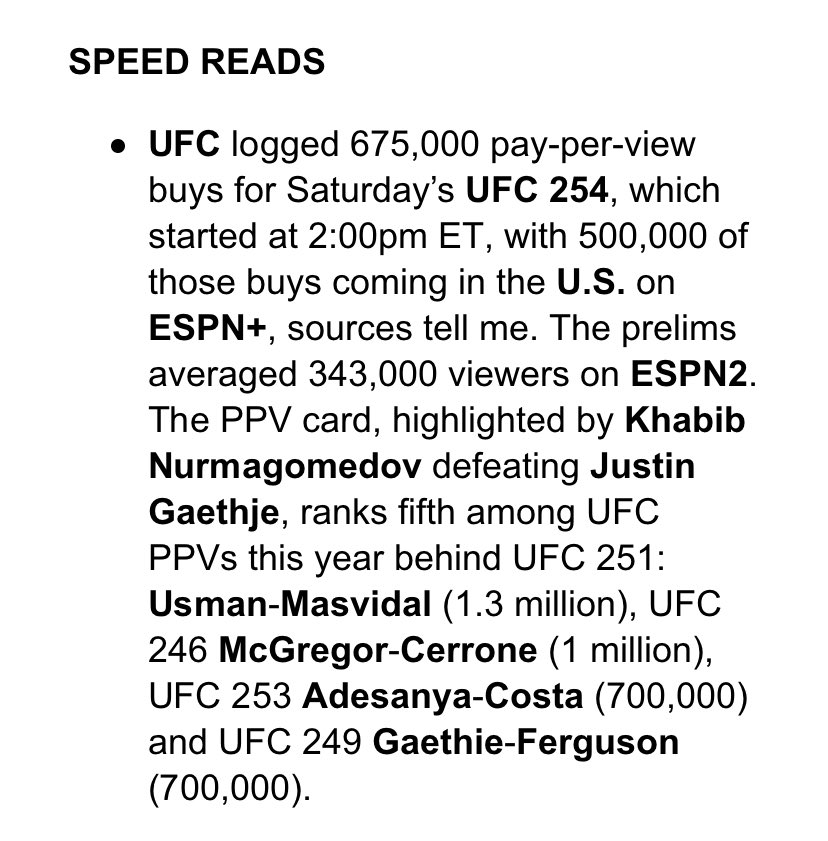 The 675,000 number is still impressive considering UFC 254 started midday in North America compared to the usual primetime hours. However, one expected more given how the event was said to be trending.