UFC 241 was a big event and its fighters were even bigger. Maybe even a bit bigger than they were actually allowed to be. The California State Athletic Commission urges fighters not to quickly cut and reacquire more than 10% body mass within weigh-ins and fight night.

Below is a list of every fighter on the card. The list shows what each fighter weighed in at, versus what they weighed on fight night. 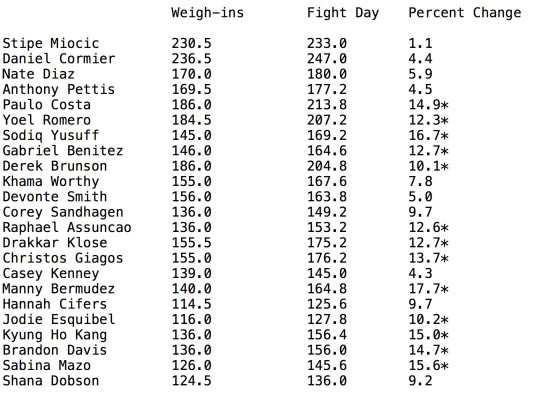 A conspicuous stand out from the chart was UFC bantamweight, Manny Bermudez. The bout took place at catchweight due to fighters cutting rapid weight the night before weigh-ins. The fight marked the second time in a row that Bermudez had to perform at a catchweight due to weight cutting issues.

On fight night, Bermudez weighed in at 164.8 lbs… almost 20lbs heavier than his opponent Casey Kenney. Andy Foster (CSAC exec director) says Manny Bermudez will have to move up to featherweight for future bouts as long as he fights in California.

Kenny still went on to win the bout via decision.

Sabina Mazo was another interesting case on the chart. Mazo weighed in at 126lbs during weight ins and 145.6lbs on fight night. Essentially, Mazo reached the minimum featherweight size and grew two weight classes in that time span.

Sabina went on beat Dobson in one of the most lopsided decision victories in UFC history.

The CSAC Wants To Buckle Down

Currently, the California State Athletic Commission doesn’t fully enforce the weight cutting policy. It simply encourages fighters to perform in certain weight classes due to their weights. Foster is currently working on a rule that would allow the commission to cancel fights when fighters surpass the 10 percent weight gain limit.

What do you think is the best way to handle cutting weight in MMA? What do you think the regulations and punishments should be for fighters that abuse the new policies? Sound off in the comments below.

Jorge Masvidal Willing To Go Into 'Someone Else's Backyard' To Fight Diaz In Cali
Read Next Post →
Click here to cancel reply.