How To Live Stream UFC 239 ‘Jones vs. Santos’ Online

In the main headliner, a light heavyweight champion Jon Jones will look to defend his strap against top contender Thiago Santos. ‘Bones’ reclaimed the title last year in a bout with Alexander Gustafsson. ‘Marreta’ Santos earned his shot after scoring back to back three wins at 205 lb over the likes of Eryk Anders, Jimi Manuwa, and Jan Blachowicz.

Holm’s last fight was back in June of 2018 where she picked up a decision win over Megan Anderson in a featherweight bout. Currently, she’s a 2-4 since she scored a knockout of Ronda Rousey.

The main card also includes some intriguing fights as Jorge Masvidal will meet Ben Askren in a welterweight bout, former middleweight champ Luke Rockhold will make his debut at light heavyweight against Jan Blachowicz, and vintage TUF winners Diego Sanchez and Michael Chiesa will throw down in a welterweight bout.

The early preliminary card start at 6:30 PM ET. Then the remaining prelims air on ESPN at 8 p.m. ET, before the PPV main card begins at 10 p.m. ET on ESPN+.

Check out below UFC 239 fight card and results:

The LHW strap is on the line during the BIGGEST night of the year!#UFC239 | Saturday | on ESPN+ ➡️ https://t.co/mFoIKzAoTn pic.twitter.com/gD8Ew9QCMK

Will she up her 🐐 status? 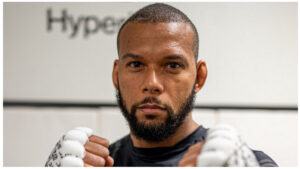