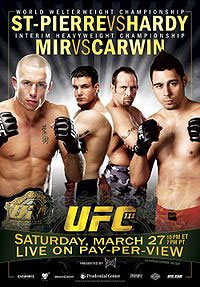 I think my brain just did flying elbows all over the interior of my skull and then ran around in circles. The UFC has partnered with NCM Fathom to show UFC 111 in select movie theaters! Your brain is doing a similar rendition of what mine just did, isn’t it? Take a moment and come back to me. Going to the movies just became 5438 times more rawesomer (and it’s approaching ‘rawesomest’). This means larger than life sized hammer fists, flying knees, heel hooks, and kimuras. It also means I won’t look so lame toting my Starbucks cup instead of a Corona while I watch. Here’s the official announcement from the Kerasotes website:

UFC 111: St-Pierre vs. Hardy Opens Saturday, March 27, 2010 – Rated NR NCM Fathom and Ultimate Fighting Championship (UFC) are partnering for the first Event in a series of 4 UFC Events that will be showcased in theatres throughout 2010. The first Event will feature George St-Pierre vs. Dan “The Outlaw” Hardy in the ultimate welterweight fight as well as the heavyweight championship fight between titleholder Frank Mir and his opponent Shane Carwin. Two world titles will be on the line in this one night event LIVE from the Prudential Center in Newark, New Jersey