Tyron Woodley: ‘I Think My Spirit Left My Body’ In Kamaru Usman Fight 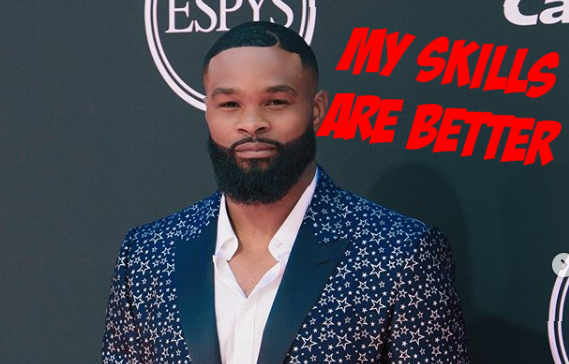 Tyron Woodley Opens Up On Loss To Kamaru Usman

Tyron Woodley lost his welterweight title in pretty dominating fashion, to Kamaru Usman. Nevertheless, he is standing firm in the belief that he should get a rematch.

At UFC 235, Woodley was dominated en route to a unanimous decision loss to Usman. The former welterweight champion immediately said that the performance was vastly different than normal. Subsequently, he was looking for a rematch with the Nigerian.

In a recent Q & A with fans, Woodley doubled down on this notion. He explained that he did not need to rewatch the fight to see what went wrong.

“When you watch the Kamaru Usman fight, I don’t have to watch it. It was a silhouette of Tyron in the Octagon or something happened when I jumped up and stomped down, I think my spirit left my body. I can give him credit for what he did. He stayed focused, he executed but we all know that wasn’t Tyron Woodley.”

However, he explained that it was not a matter of the wrestling pressure from Usman.

“So I don’t have to go back and watch the film and say the chain wrestling [affected me]. I’m a Division I All-American , not Division II. I’m not knocking that but it’s a way different level. When you think about striking, when you think about my resume, it’s not that he did something so great that I couldn’t keep up with. It’s just the fact that it’s one of those nights when you walk out there, everything feels perfect and you get close to your opponent and the battery pack is snatched out of your back. That’s really what I felt like.”

Furthermore, Woodley believes that it is not an issue of skills or distractions. In fact, he believes in a rematch, his skills would be too much for Usman.

“Kamaru Usman skill set wise on paper, I’m a nightmare for him every day of the week. What happened in the Octagon is one, I never make excuses. I walked into four world title fights with the weight of the world on my back, personal issues, injuries, I never healed from the injury before, but you guys never hear about that.

Some people believe that “The Chosen One” will never get another shot at UFC gold. Nevertheless, if Tyron Woodley wants another crack at Kamaru Usman, it will have to be after Usman’s fight against Colby Covington.