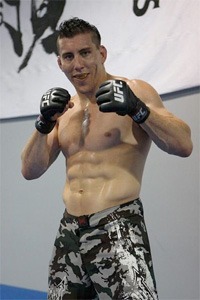 By this point, Jay Hieron must be locating the biggest gun imaginable to shoot God directly in his forehead. Dude was the first IFL Welterweight champion and only had the opportunity to defend his belt once before the entire organization collapsed last year. Thing’s looked pretty bad for Hieron until Affliction scooped him up for Affliction: Trilogy to bang against Paul Daley. The earth continued to spin at it’s normal pace until Barnett was caught with anabolic steroids just days before the fight. It was like someone stuffed a giant cherry bomb in the MMA world and drunkenly lit the fuse. Affliction rushed to find a replacement then literally overnight Affliction collapsed leaving guys like Jay Hieron unemployed from sticking fists in people’s skulls. As all the MMA organizations rushed to salvage what they could from the Affliction apocalypse, Strikeforce offered Hieron to be the replacement of Joe Riggs for the Strikeforce Welterweight Title against Nick Diaz. UFC countered that offer with a multi-fight deal but Hieron told them he can’t pass up a title shot and he’s recently signed a contract with EA Sports to appear in their upcoming game…a game in which I will probably defeat you regardless of time or location. UFC offered him another contract but Jay Hieron still turned it down.

Now it looks like Nick Diaz will not be fighting in Strikeforce’s Welterweight Title fight due to a prior engagement with a nicely rolled blunt. On the Strikeforce Conference call today, a few reporters notified Scott Coker (CEO of Strikeforce) that the California Athletic Commission hasn’t been contacted by Nick Diaz and that he had until 12pm to complete the drug test or he will be pulled from the card. Well it’s well past 12 and Diaz is still missing in marijuana action. The California Athletic Commission confirmed that The Ultimate Fighter Season 8 contestant Jesse Taylor will be replacing Nick Diaz in the title fight. Jesse Taylor just fought in the Dream 10 card when his opponent Dong Sik Yoon injured himself doing…something? No one really knows, it was probably the strangest DREAM fight to date (yeah, even stranger than Jose Canseco vs. Hong Man Choi). Jesse Taylor then honored Dong Sik Yoon by balancing the trophy on his head and dancing around in front of the camera. D**k ‘Starscream’ Grayson and I laughed hysterically for hours at 3am in the morning. It was one of those things were you had to be amped up on 8 cans of Red Bull to fully understand. [Source] 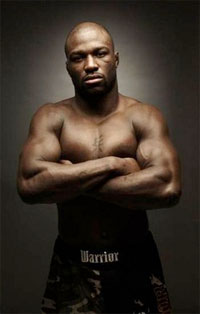