Tony Ferguson Goes Off On Dana White, Likens Him To A ‘Drug Dealer’

Ferguson didn't hold back when talking about UFC president White and fighters being underpaid by the promotion.

In his first media appearance in a year, Ferguson took to reporters ahead of his highly-anticipated lightweight fight with Michael Chandler at UFC 274.

Of course, the pair have history, most notably when Ferguson stated Chandler had “Dana White privilege” which is why he earned a title shot so quickly.

It was funny for everyone at the time, including White, but Ferguson doesn’t find it so funny anymore.

Tony Ferguson: Dana White Is Like A Drug Dealer

Fighter pay has been a hot topic in recent years, with more and more fighters being outspoken against White and the promotion for not being paid what they’re worth.

“El Cucuy” — who has commented on his pay in the past — is no different as he went off on White for recent comments he made saying boxers were overpaid along with retaliation tactics from the UFC.

“I think we’re underpaid, personally, to be real,” Ferguson said. “… I asked Dana to box. He said, ‘F*ck no.’ I’m like, ‘Why? I want to go play baseball. I want to go do other pro sports. I’m an athlete. I grew up playing different sports at a high level. … I want to go do all these couple things but then I have this guy right here acting like a f*cking drug dealer telling me I can’t go and do this sh*t. I want to go make more money for my family.

Ferguson would expand more on the promotion later on.

One thing is for sure — Ferguson, who is looking to end a three-fight losing skid, certainly has a chip on his shoulder going into his battle with Chandler this weekend. 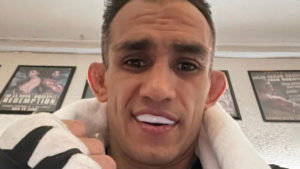 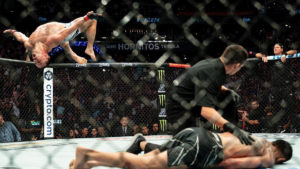