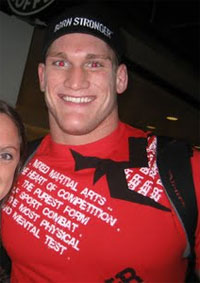 If all human beings were modeled after Todd Duffee, the earth would eventually sink out of the sun’s orbit. The planet could no longer produce enough chicken and steak to feed the world’s population and everyone would just start cannibalizing each other like some Robert Rodriguez movie. Todd Duffee looks like he belongs in the Marvel universe, the fact that he’s a living being with real emotional needs is beyond daunting. God created someone this big to just brutalize the UFC heavyweight division and so far, he’s been 100% accurate…up until last night.

At UFC 114, it was Todd Duffee’s night until he was clocked by Mike Russow. See, that’s probably where Todd Duffee’s night ended. Sort of like how you can pinpoint the moment in Spring Break when you can tell that you won’t remember the rest of the night. It took one punch to temporarily halt the man with the fastest knockout in UFC history. Last night, ZUFFA released the pay salaries at UFC 114 and Todd Duffee only pulled $8,000. Now compare that to Rashad Evans’ $435,000 paycheck or even the $120,000 pulled by Lil Nog and you’ll probably notice a certain disparity in Duffee’s payroll. Dana White, dude drives a Smart Car.

You may have thought Todd Duffee was overhyped but ZUFFA’s accountant surely did not. If you’re interested in seeing how much other total strangers were paid last night, MMAFighting has all the answers to your nosy questions.

The DREAM 15 poster must be awesome, if you can read it
Read Next Post →
Click here to cancel reply.