TJ Dillashaw On Cody Garbrandt Rematch: “I Love Getting Rich For Knocking Cody Out” 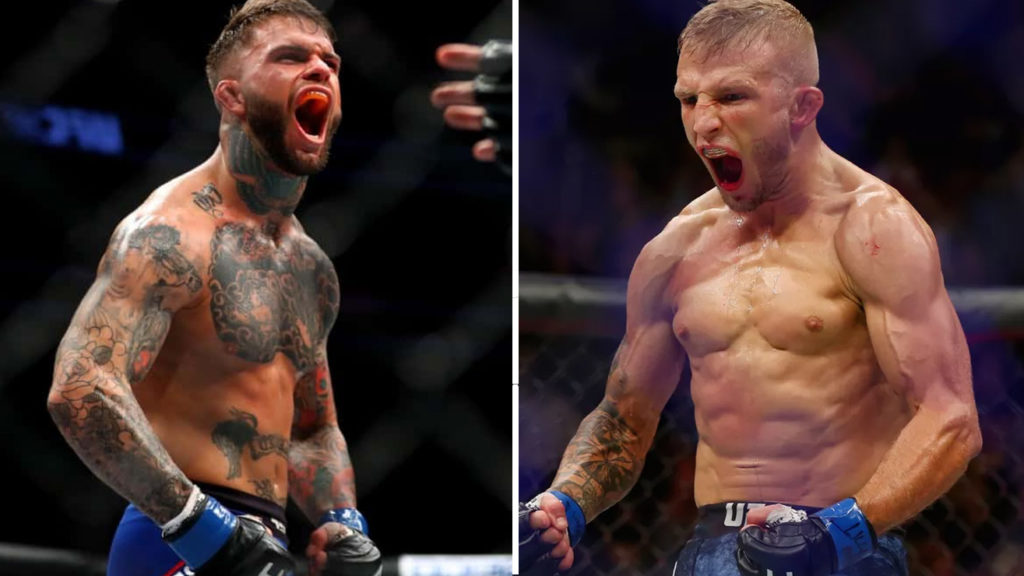 Bantamweight champion T.J. Dillashaw defeated Cody Garbrandt by second-round knockout last November at UFC 217 doesn’t believe Garbrandt deserves an immediate rematch. But the matchmakers seems to think so, so the Dillashaw has his mind wrapped around the bout slated for UFC 227 on Aug. 4 at Staples Center in Los Angeles and the paycheck it will bring.

Dillashaw also reminiscences how hard Garbrandt and his camp, Team Alpha Male, tried to get under his skin previously. And that’s enough to fire up the champ for another go at his rival. (Via MMAMania)

“I love getting rich for knocking Cody out,” Dillashaw said with a smile during a media luncheon.

Dillashaw said, Cody does have holes in his game and is confident going into the bout as the two are former teammates and their time spent training together gives him a good idea of what could happen in the Octagon.

“I think there’s a lot of holes I didn’t show as well in his game when I finished him in the second round,” he continued. “I still believe those same openings will be there. I don’t think he’s an intelligent fighter to switch up what he does.”

Dillashaw reminds the memory of triumph will be enough to keep the verbal jabs of Garbrandt at bay. The pair traded verbal barbs for months leading up to their first fight, but he believes this time its whole lot different.

“It’s a lot different this time,” Dillashaw said. “He can’t be such a jerk – he just got finished. For as much crap as he talked, he deserves to get his ass kicked again.”

Dillashaw has been on the campaign trail trying to lock down a showdown against Demetrious Johnson for some time now and even managed to get UFC president Dana White on board. But nothing comes to fruition. Now Dillashaw keeps a close eye and hopes to face the person he expects to win at UFC 227’s co-headliner, flyweight champ Demetrious Johnson, who also takes on a rematch against rival Henry Cejudo.

“He’s got that spot,” Dillashaw said of Johnson. “I’m looking to take it. We’ve both got fights ahead of us to worry about, and we’ll talk about it after our fights.”

Who do you think between Dillashaw vs. Garbrandt will come out victorious?

ESFL Returns With The Best Xbox EA UFC 3 Players In The World Throwing Down
Read Next Post →
Click here to cancel reply.