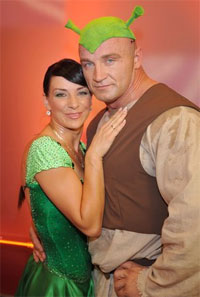 Strap on your helmets and follow me for a wild ride on the MMA fight booking rollercoaster. Your final destination will make you want to soil whatever underpants you have on. Tim Sylvia was originally scheduled to fight Hong Man Choi for Dynamite!! 2009 on New Years Eve. Actually, Tim was scheduled to fight Alistair Overeem but the guys at FEG decided to give Ubereem Fujita’s skull…and we all know how that turned out. Sylvia turned out having no one to fight for New Years Eve so he probably did what every good Bostonian does: Park cars and eat clam chowder. A couple weeks later it was announced that Tim Sylvia would be banging against Wes Sims March 20th in Ohio. The fight was announced just a few days before Wes Sims’ Strikeforce bout with Bobby Lashley. After Bobby Lashley’s domination of Wes Sims in the first round, the Ohio athletic commission decided Wes Sims vs. Tim Sylvia was not ‘competitive’ and scrapped the entire bout. Keep in mind, this is the same dude who was the former UFC heavyweight champion and then literally the next year he was KOd by a 48 year old Ray Mercer with an MMA record of 0-0 at the time. Brandon Lee Hinkle was Sims’ replacement and everything seemed to be flowing smoother than a pint of Guinness poured on my ex-girlfriend’s laptop when I found out she cheated on me. This week the news broke that Tim Sylvia’s card, Adrenaline V, was canceled due to the cancellation of a concert that was supposed to go in conjunction with the event. Bummer for Tim Sylvia.

Today, the Boston Herald is reporting that Tim Sylvia is now scheduled to fight in the Korean based ‘Moosin’ MMA organization which will hold a bout in the Boston area April 23rd. His opponent is none other than your boy, The World’s Strongest Man, Mariusz Pudzianowski. I know, I know…who the hell would promote this freak show? Butterbean. Well, he is. Promoters Corey Fischer and Eric “Butterbean” Esch were the first to break the story to the Boston Herald today regarding the event. This year continues to deliver the nuttiness. [Source]

Brock Lesnar wants Mir to shut up and focus on Carwin
Read Next Post →
Click here to cancel reply.