Ring entrances are like foreplay, those who are good at it tend to win you over before ever getting inside. Prince Naseem Hamed put on extravagant displays of arrogance, turning his walk to the ring into a scene from thriller or skip the walking all together and just ride in on a magic carpet.

James Te’ Huna once turned his walk to the octagon into a scene out of Men in Black, dressing himself and his corner men in the iconic black suite and tie, made famous by Will Smith and Tommy Lee Jones. King Mo had girls throw flower petals at his feet while he danced his way to the cage. Adrian Broner, turned his ring entrances into impromptu rap videos, dancing with an entourage that would make MC Hammer jealous.

And since we’re on the topic of dancing, what about Jason “Mayhem” Miller’s moves on his way to the ring for his Dream 9 matchup? Honestly screw the moves, what about those school girl outfits?

As flashy, fun and over the top those entrances where, along with a slew of others I won’t waste time mentioning, none of them hold a candle to the greatest entrance in any combat sport.

Yoshihiro Akiyama, also known as Sexyama, puts everyone else to shame with a cage entrance that is both elegant and fierce, and that of legend.

His song choice, “Time to Say Goodbye,” weather you know it from the Catalina wine mixer or Andrea Bocelli, sparks a sense of emotion unlike any other song could. Shoot, even when Will Ferrell sings it I get choked up. Like Sexyama, this song is both powerful and beautiful, making it the perfect compliment to the perfect man.

Also, the comradery between Sexyama and his team make you appreciate what a fighter goes through in these moments. Where most fighters just rush to the cage and high five fans, Sexyama and his corner men take their time, stopping in the middle of their walk to kneel down together, honoring their opponent. They then hold hands like only real men can and send their brother off to do battle. The whole scene comes together beautifully for the coolest entrance I’ve ever seen. 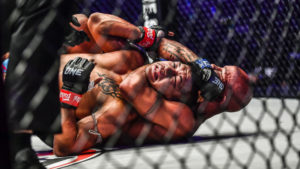 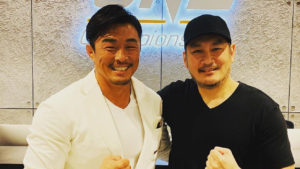 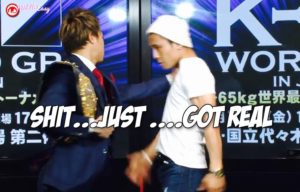 Video: Takeru and Ozawa Kaito give us a stare down brawl with actual violence at K-1 World presser 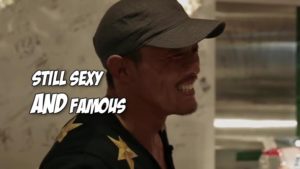 Report: Sexyama is hugging Liam Neeson, Tim Sylvia is friends with Steven Segal. What does this mean?