Stephen Thompson is still hoping he is the one who gets to challenge Kamaru Usman next.

Usman is coming off an impressive third-round TKO win over Gilbert Burns earlier this month at UFC 258. And “Wonderboy” was quick to call for the next shot soon after.

However, Usman proceeded to call for a rematch with Jorge Masvidal despite beating him on shot notice less than a year ago at UFC 251 in July.

It’s understandable why Usman would opt to go that route. He has genuine beef with Masvidal and beating “Gamebred” again with a proper camp would give him an easy payday.

Thompson, though, is not a fan of the idea.

“For one, his last fight was [against] you, so it just doesn’t make sense to fight him again,” Thompson told MMA Fighting. “He clearly lost. I know it was short notice, but I just think that Kamaru Usman knows. It’s smart for him, he knows he can beat him for a high pay, it’s a big name, there is beef there so it makes sense on his part. As a fan and as a fighter, and as someone who has been at the top of the game and trying to get title fights, it doesn’t make sense for that to happen.

“Fight somebody you haven’t fought yet. You beat pretty much everybody except me in the top-five. That’s it. Of course, you’ve got Michael Chiesa who is No. 6, he hasn’t fought Michael Chiesa either. But keep on going down the line. You beat everyone up here, who’s next? It’s this guy.

“C’mon Usman! C’mon, man. Fight somebody you haven’t fought yet.”

One positive for Thompson is a recent tweet from Usman stating anybody could get it, seemingly indicating that negotiations with Masvidal didn’t go as planned.

Fuck it I’m not feeling generous anymore. Anyone can get it #AndStill 👊🏿🌍🤴🏿

And for Thompson, that provided hope for what he expects to be a fun fight between him and Usman.

“It was super cool to actually see Usman say that anybody can get it,” Thompson explained. “That leads me to believe that I have a possibility to make this thing happen.

“If the fans love it, the UFC likes to get behind it. As of right now, I see a lot of people saying I should get the next title shot, that I should be next for Usman. But you never know, so I’m staying in shape, I’m working out, gotta get this hand checked out and hopefully we can make this thing happen. I think it would be an awesome fight and Usman even said that his toughest fight would be with someone like me where it would be hard to prepare for, a difficult read, I’m the third best in the division with takedown defense so I think it would be a fun fight.

“And that’s why I want it because it would be a great fight. Obviously it would be great to fight for the title again, but I like Usman. I think he’s a great guy, good champion and it’s the time to really test my ability at that level who is the best.”

Thompson last competed for the welterweight title in 2017 when he suffered a majority decision loss to Tyron Woodley.

He has gone 3-2 since but is currently on a two-fight winning streak following impressive victories over Geoff Neal and Vicente Luque.

If anybody deserves a shot, it’s certainly Thompson. 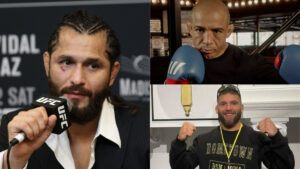