And the banner (compliments of Sherdog) above is the only picture of him.

His MMA record reads like an unlockable character in Tekken. Three days ago he knocked out a dude with a flying knee in just thirty-seven seconds. Earlier this month he TKOd a guy at CTA Combat in just over a minute. In fact in his last nine fights he finished all of them. Wait, there’s still some more of your mind to be blown, I see it there — cowering in the back of your skull. He’s already fought seven times this year and he’s only been past the first round only once in 2013. In his 20-0 career he’s only been to the judges twice. That’s eighteen finishes in a twenty-fight career.

Julio Cesar Neves — we would like to believe he’s a real person, but for all we know this could be some sort of super-elaborate troll job. I know what you’re thinking, trust us we’ve combed the inner-vaults of YouTube to see if we can uncover any glimpse of this guy fighting. There’s just no footage of this Julio Cesar Neves. The only thing we know is Neves is from Brazil and fights at 145 lbs out of the Renovacao Fight Team. He began his MMA career on October 1st 2011 in which he finished Maicon Gregor with a flying knee in the first round. In fact, the dude has six flying knee KO wins.

Check out Julio Cesar Neves’ record from the Sherdog Fight Finder and see for yourself. 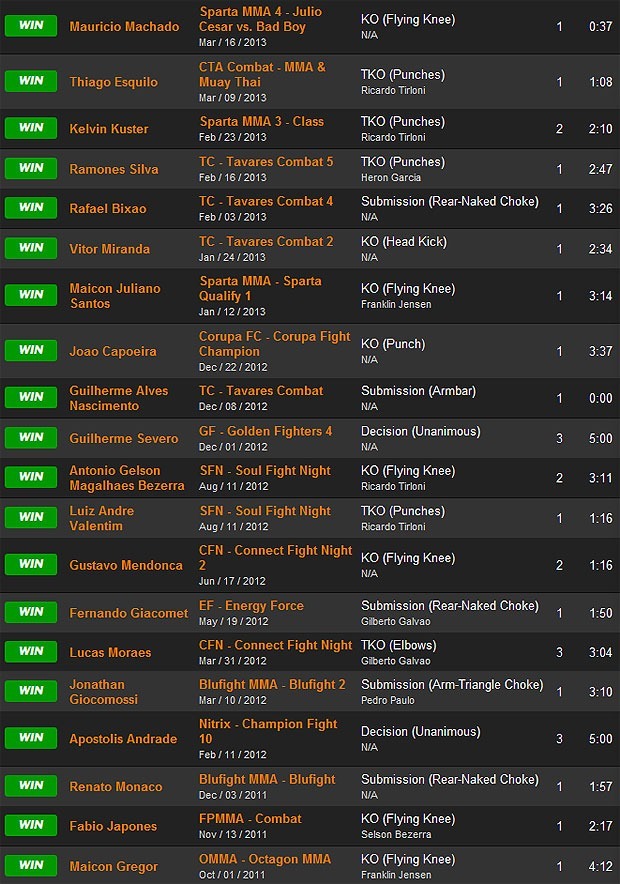 If you need a logical breakdown of Weidman vs Silva, then watch this one from Michael Bisping
← Read Last Post

Cesar Gracie insinuates there was a spy in Nick Diaz's camp that reported back to GSP
Read Next Post →
Click here to cancel reply.