Chicago, a town known for its strikingly accurate resemblance of Gotham City. Wait, so you’re telling me that Gotham City was just modeled after Chicago and in the films, the production crew actually used Chicago to represent Gotham City? Well there goes my childhood. That undoubtedly means Chicago is infiltrated with criminals who also have an expert taste for designing over-the-top costumes. Chicago also has a tendency to serve criminals up with a brutal beating, as evidenced by this story from FOX Chicago of a robber picking the wrong person to mess with.

Police say 24-year-old Anthony Miranda walked up to a car which was parked near 55th and Kenneth about 11:30 p.m. and asked the driver for a lighter.

When the driver said he didn’t have one, Miranda allegedly pulled a handgun, pointed it at the driver and demanded money. And even after getting some money, he ordered the driver out of the car, police News Affairs Officer John Mirabelli said.

At some point, Miranda’s attention was diverted and the victim was able to grab control of the gun and the two wrestled.

During the fight, Miranda accidentally discharged his gun, shooting himself in the ankle, Mirabelli said.

The victim — who told police he’s a martial arts expert and ultimate fighting champion — was able to pin Miranda down until police arrived. Police arrived to find Miranda with a face full of lacerations and two black eyes. He was taken to Holy Cross Hospital for treatment, police said.

Now who is this mysterious fighter.

A lot of people are throwing Andrei Arlovski’s name in the mix since he is a former UFC champion. Granted, most of these mainstream journalists believe that everyone who competes in MMA is a ‘UFC champion.’ Check out the would-be robber’s face after he was on the work-end of an absolute mauling. [Source] 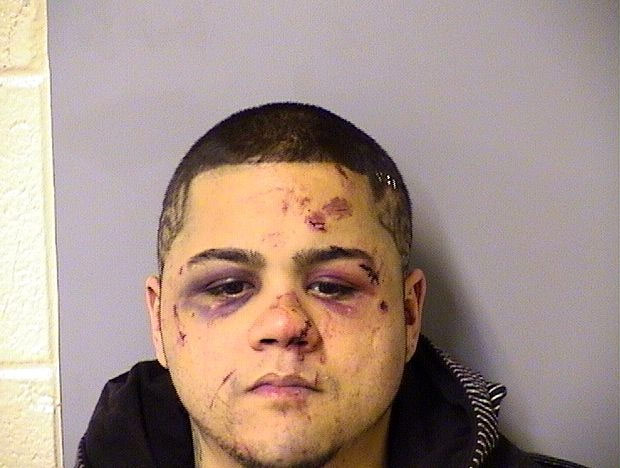