This is the stupidest Ronda Rousey article we’ve ever seen

Let’s be clear, the greatest thing to ever come from Examiner is Ryan McKinnell — he’s not the guy that wrote this ridiculously stupid article about Ronda Rousey. The guy that did is named Eric Holden, and he’s actually on Twitter. Perhaps the most astonishing part of all is this article has been on Examiner.com for an entire day and hasn’t been removed from the site. It clearly shows the quality of work the editor’s at Examiner deem acceptable. I mean Jesus friggin’ Christ in what mental state did this Holden guy believe titling an article ‘Ronda Rousey put hot meat in her mouth to celebrate UFC 157 victory‘ on a highly trafficked site was a great idea? Folks, The Examiner is a media source approved by the UFC, which means at the next UFC event he’ll be sitting cageside while you whip out your binoculars and struggle to see the action inside the Octagon.

I’m anticipating (hoping) this article will be deleted, but if it isn’t, I’ve copy/pasted it for you. MMA media, damn. Check out a screencap of the headline and the full article below. 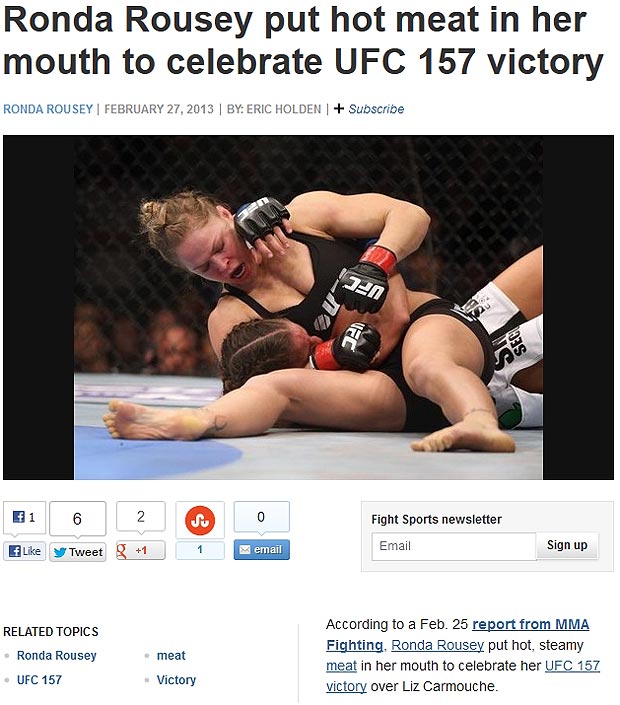 And here’s that idiotic article, in its entirety.

According to a Feb. 25 report from MMA Fighting, Ronda Rousey put hot, steamy meat in her mouth to celebrate her UFC 157 victory over Liz Carmouche.

Rousey had apparently been craving tender, juicy meat throughout her training camp, but she wasn’t allowed to indulge because she had to worry about contractual weight requirements.

Once the ‘W’ was secured and the fight was over, Rousey was finally able to suck on some delicious bones, as her camp explained that she feasted in her private hotel room following UFC 157.

“Rousey celebrated the win by eschewing a post-fight after party in favor of returning to her hotel room to eat buffalo wings,” MMA Fighting reports. “[Rousey’s manager] said that’s about par for the course from a fighter who has raced to stardom without losing herself.”

Of course, a buffalo wing celebration is Rousey’s typical way to savor a key victory.

Rousey has been celebrating wins by buffalo wing feasts ever since she competed in the amateur ranks, and nothing has changed even after turning pro.

Through it all, Rousey stays humble and true to who she is.

“She hasn’t lost any of her humility at all,” Rousey’s manager Darin Harvey said. “My dad says when you put someone on a pedestal, they’ll only look down on you. She’s been put on this pedestal but she’s not looking down on anybody. She’s maintained her humility. Of course, she’s a young woman and it’s an incredibly challenging, confronted with all this success and all this fame. And it’s happened — three years is overnight in this business — it’s happened very rapidly to make history, but she’s handling it very well.”

It says something about Rousey’s humble nature that she decided to celebrate her UFC 157 victory with a tight-knit group of friends over a simple meal, rather than splurging on an expensive, fine dining experience.

Stuart Cooper Films on Rodrigo Caporal: 'I will train in the gi forever.' Amen
Read Next Post →
Click here to cancel reply.