This is how Leandro Issa and Mitch Chilson cut weight just before the ONE FC: Rise of Kings weigh-in 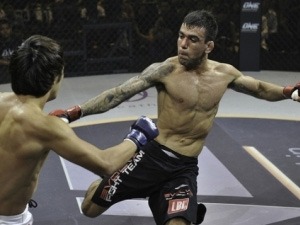 Originally this video was supposed to have Shinya Aoki and Zoro Moreira, but after their late-night run, they walked back home to finish their session of Borderlands 2. Can’t blame them either, since I’ve been in Singapore I’ve had Xbox 360 withdrawals to such a great extent that I’m considering purchasing a console and then returning it just before I go back to the states. It’s a desperate move for a little bit of digital foreplay — but at the end of the day, I’m far too unorganized to do something like that.

Yesterday I unintentionally cut weight after I stumbled across this sign near a restaurant. The place actually proudly claims they’re the ‘King of Pig’s Organ Soup’ which I’m sure is a great honor amongst street vendors across South East Asia. We don’t believe Evolve MMA’s Leandro Issa and Mitch Chilson consumed any organ goodness to cut weight prior to the ONE FC: Rise of Kings weigh-in, but if they did it would make the cut far less stressful. Check out this clip of the two fighters trying to get their mind off of Krispy Kreme by sparring in the cage and indulging a hefty amount of water.

We don’t think Stephan Bonnar’s walkout shirt is an elaborate dig at Jon Jones, but some people do
← Read Last Post