The winner of Pedro Rizzo vs. Tim Sylvia will get a UFC contract 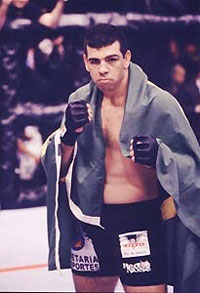 I’ve never met Tim Sylvia but I did have the chance to meet Pedro Rizzo the day after Gilbert Yvel exploded his mandible with that brutal ground and pound at The Ultimate Chaos last year. The ref just sort of looked at an unconscious Rizzo getting bombed with punches on the mat in Biloxi, Mississippi without intervening. If you’ve never visited that area of the country, Biloxi is a good place to get malaria in the middle of June. There’s a reason they call Pedro Rizzo ‘The Rock’. Despite being absolutely pounded upon, Rizzo’s face didn’t have a single scratch on it. It was like something off a romantic comedy with a cast of people that can magically withstand all physical damage.

Not many people are interested the upcoming Tim Sylvia vs. Pedro Rizzo bout this February in Atlantic City, New Jersey, but those same people need to realize that everything that has been said about Ubereem was said about Pedro Rizzo back in the day. Dude started off his career with a nine-win streak amassing victories over Vernon White and Mark Coleman only to be stopped by Kevin Randleman in a UFC heavyweight title bout.

According to Pedro Rizzo in a recent interview in Gracie Magazine, the winner of Tim Sylvia vs. Pedro Rizzo will receive a return ticket back into the UFC.

“Dana White mentioned that the winner should get another chance in the Ultimate Fighting Championship.”

“As the date hasn’t been set, it’s just a verbal agreement, so I’m getting back to light training. But I want to have a good performance. Who knows? Maybe I’ll manage a return to the UFC. I feel really comfortable fighting in that Octagon. I feel leaving there was the biggest mistake of my career, my great regret.”

“I left on my own volition (end of 2003), but at that time I felt stagnant and the big heavyweight challenges were in Japan. I always went after the toughest matches, so I had to face the guys in Pride. What to do? It didn’t work out. But today, with Cain Velasquez as champion, the UFC is really well represented. I feel Cain could even take out Fedor Emelianenko.”

Interesting fact about Tim Sylvia, the guy has never ventured outside of the US to compete in a professional MMA bout. There has to be some complicated, Freudian explanation behind that. [Source]

If you had any doubts that Golden Glory is taking over, check this out...
← Read Last Post
Watch Jorge Rivera sing mildly popular 80s songs in a ridiculous wig
Read Next Post →
Click here to cancel reply.