Yes, an ENTIRE BOX. I capitalized ‘entire box’ and made the text strong so you wouldn’t miss the fact that an entire box will be given to the greatest tweet.

That’s hundreds of dollars of the world’s premium MMA cards. We’re talking autographs, the fight-worn shorts cards (all from the best knockouts in the last few years, of course) and this year’s prized card: an autographed Ronda Rousey card commemorating the first ever women’s champ in the UFC. Oh wait, it’s not just a card, it’s a friggin’ ticket to redeem for an entire autographed UFC belt. You don’t see those every day, and certainly not out of the light heavyweight division. 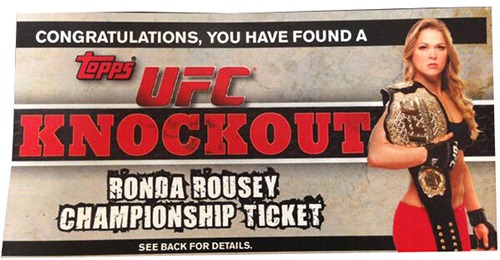 Seriously swank stuff. You better step your tweeting game up this Saturday while you watch UFC 160, we will be judging your tweets with even more scrutiny than usual. Follow @MiddleEasy and @ToppsCards!

Since we know you want to see it, check out Fallon Fox's entire fight from last night right here
Read Next Post →
Click here to cancel reply.