Some of you have already elected Fedor as the president of your own little microchasmatic xenoverses so this news should be like a mini victory for your campaign to make Fedor supreme leader of the entire omniverse. Its time to turn off CNN and FOXNews and MSNBC and stop obsessing over contracting necrotizing fasciitis or the 4700 asteroids threatening to obliterate the planet Earth to its final demise. Instead live in the now, relax and break out your knock off Fedor sweater. Tie that sweater to a flag pole in your front yard and salute it in honor of the newly elected president of the Russian MMA Union.

Thanks to a report on MixFight.RU we can tell you that an MMA union was formed in Russia yesterday and via a unanimous vote Fedor Emelianenko was elected president of this newly formed Russian MMA union. According to the report over 100 ‘dignitaries’ representing over 52 regions were in attendance for the formation of this union. The union is a part of the newly formed IAMMA. Here’s a few pictures taken by MixFight.RU from this historic event, unfortunately who ever was in charge of Fedor’s wardrobe failed miserably as the symbolic sweater of power is nowhere to be seen. Despite there being no sweater he does manage to pull off the suit jacket look like a natural. 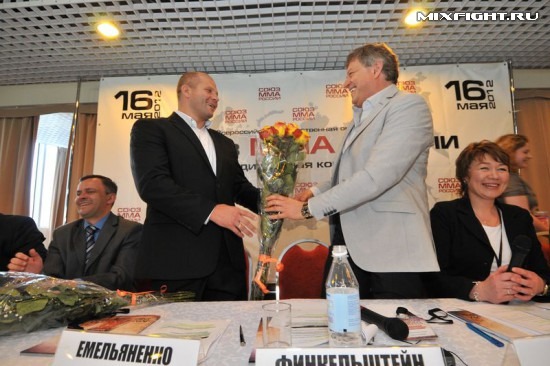 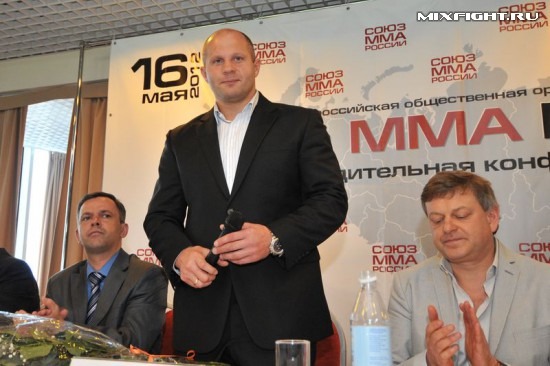 Also announced at this meeting, a World Cup of MMA to be held November 1 in St. Petersburg Russia with fighters from over 50 countries. If you can read Russian like our Bauzen, or just feel like playing around with Google Translate, you can check out the rest of the article on MixFight.RU. All hail President Fedor-first the Russian MMA Union, next step the Omniverse. [source]