The ONE FC: Rise of Kings fight card is nearly complete, and it’s shaping up nicely

ONE FC: Rise of Kings, hopefully Invicta FC will have a card entitled ‘Rise of Queens” and the MMA world will truly experience a sense of commonality and equality. If male dominated MMA promotions feature ring girls, then it’s only right that Invicta FC feature ring boys, scantily clad in golden shorts with matching shoes and socks. It’ll be like that Magic Mike movie, just with a minor amount of MMA thrown in there to appease the hard cores.

Hopefully Victor Cui, the owner of ONE FC, won’t entertain my idea of shirtless men holding cards over their head while a crowd of raving fans yelled at them. I prefer my shirtless men covered in sweat and in a cage doing battle with other shirtless men. There’s no need to bring women into this equation — unless they’re punching some other chick in a battle of female supremacy. Unfortunately at ONE FC: Rise of Kings, there will be no women on the card — however it’s overflowing with a healthy blend of title fights, super fights and even a grand-prix thrown in there for good measure.

Check out the nearly complete card for ONE FC: Rise of Kings which goes down October 6th on a PPV service near you (or live streaming, whatever floats your metaphorical boat). 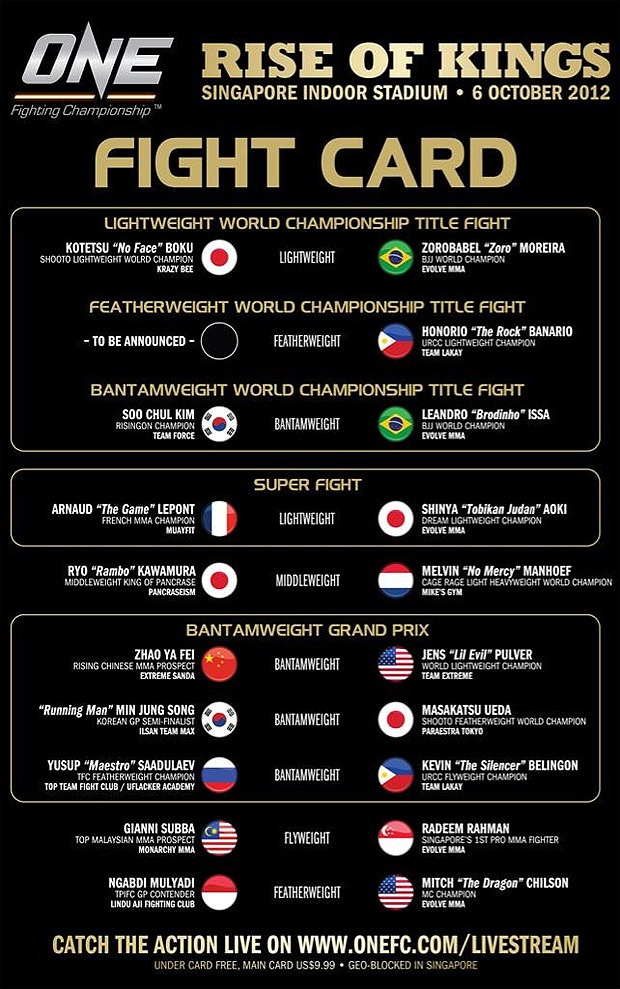 If you missed the first episode of TUF Smashes, don't worry. We have it all right here...
Read Next Post →
Click here to cancel reply.