For some reason, everyone in the world has been struck with a debilitating case of the ‘Mondays’ today. Your brain cells aren’t prepared to start an entirely new week this early in the morning. Suddenly you’ve realized how absolutely mundane your office job really is or how mind-numbing it is to sit in a lecture hall as your professor drones on about topics you hardly understand. There’s nothing to cure the Mondays aside from patiently waiting it out. Nothing will be accomplished today — nor will the world of science stumble on any ground-breaking discoveries. It’s Monday, the day in which other days of the week shun. Hopefully this newly released poster of UFC Macao will bring some light into your relatively dark Monday.

Yes, that’s Bruce Lee and the poster does vaguely resemble Lee’s classic ‘Enter the Dragon.’ It’s also important to note that even though the card is taking place in China, there are no Chinese fighters on the card. Zhang Tiequan is from Mongolia, Cung Le is Vietnamese and Stun Gun is from Korea. Rich Franklin sort of looks Chinese if you take four shots of Jameson and smash your head against a hard object for fifteen minutes. Check out the poster below — but take it easy on the shots. 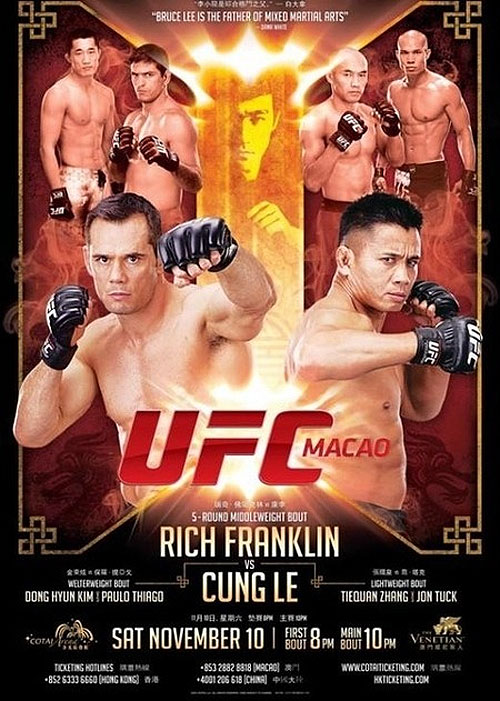 Tyrone Spong just announced he is making his MMA debut and already has two fights lined up before the end of 2012
Read Next Post →
Click here to cancel reply.