The Joe Warren vs. Omigawa fight we all hoped for at Dream 16 is not happening 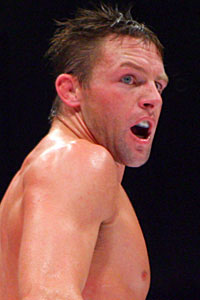 All the rawesomite that was packed into our TVs when it was announced that Joe Warren will bang against Michihiro Omigawa at Dream 16 will have to be removed. Earlier today, rumors floated around that Joe Warren was being barred by Bellator from competing in Dream 16 due to a contractual agreement he had with the organization. So we have some good news and bad news. Let’s get the bad news out of the way first: Joe Warren will not be fighting in Dream 16. It’s devastating I know. I’m not the only person who wanted to see The Baddest Man on the Planet make a trip to the home of The Baddest Mechanized Reptilian on the Planet. The good news is that it wasn’t Bellator’s fault. Well, not entirely.

Joe Warren’s manager informed us that Warren will not be fighting in Japan due to several reasons, however the primary one is the amount of time in between his Bellator 27 title bout and Dream 16. Apparently Joe Warren was never committed to fighting at Dream 16 and the damage he sustained in his fight with Joe Soto was too severe for a three-week recovery.

Bummer. Hopefully FEG will snatch another American featherweight to continue this America vs. Japan rivalry they’re promoting. It’s cool though, we already won. Japan is already an American colony, even Shinya Aoki admits it.