One night, two cards. Bellator and the UFC went head to head and the resulting collision gave us a hangover that only a Justin McCully reveal and a Alistair Overeem knockout could induce. Ouch. It was one hell of a Friday night. Let’s start with the UFC. This UFC card was FUN. Not the band fun, but like the time flies type of fun.

First off, let me start with Gegard Mousasi is an awesome fighter. I love watching him right. Well, not last night. Looked like he fell asleep at the wheel. Jacare Souza did anything he wanted and whatever he wanted last night locking in a 3rdround guillotine. However, while watching the fight, I couldn’t help but think Chris Weidman would eat Souza’s lunch if they ever squared off.

Ben Rothwell danced, Ben Rothwell gave us a great post-fight speech, lets just hope he gives us a negative drug test so we can fully celebrate this MMA moment. The upset TKO over Overeem gives Rothwell his first back-to-back wins in 7 years! But yo, Alistar’s kind of a bust eh?  Not sure how you can put him in there with a heavyweight even sniffing the top 10 at this point.

Derrick Lewis ran into Matt Mitrione’s forearm and that was the end of his night. That was thanks to the inexperience of Derrick Lewis and the high-level striking being taught by Henri Hooft over at the Blackzilians camp. No disrespect to Bang Ludwig, but I think Hooft should probably be mentioned with the best striking coaches in the game currently.

These dudes came ready to scrap and we love them for it. I feel bad that Chiesa had to lose in that fashion but it was a worthy stoppage. I mean he damn near had a vagina opening up on his eyebrow.  Let these guys rest up and let them scrap it out in a rematch.

So, this was an interesting way to promote a fight. The early 90s WWE approach. We had the guy in the mask (Raise your hand if you knew that was Justin McCully.) Bonnar cut a heel promo, Ortiz cut a face promo, all we needed was Jim Ross on the microphone, Vince McMahon to make a stipulation, each guy to sign a contract and then Ortiz to push/put Bonnar through the table.

Friere won a well-fought rematch to claim the Bellator Featherweight strap last night. This fight truly showed how much Friere has grown as a fighter since the last fight against Curran. This is one of those fights where both fighters end up looking good afterwards.

He Was Missing the Umbrella Girls, but Mo was still impressive.

King Mo showed off all aspects of his game to score a TKO over Dustin Jacoby. I have to wonder, does Coker give Mo the Rampage rematch?

Lashley picked up his first Bellator win against Josh Burns after locking in a rear naked choke. Burns may be 0-5 now in Bellator but a W is a W and hopefully this is the start of a fruitful run for Lashley in Bellator.

Cheick Kongo can do more than kick people in the nuts/knock them out ya know.

Kongo scored a submission when he choked out Lavar Johnson last night! His first submission since 2003! That was 11 years ago! I was a junior in high school! I was driving a primer gray 1992 Ford Tempo! Anyway, Kongo improves his Bellator record to 4-1. Thanks to Zprophet for the replays. 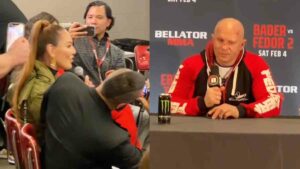 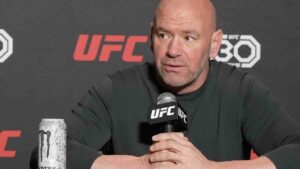 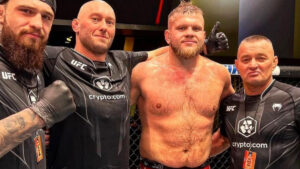