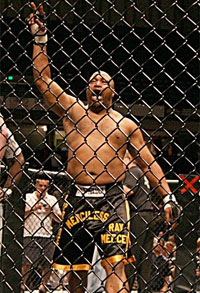 The day Ray Mercer appears on Dancing with the Stars is the day in which the terrorists win. If that day ever comes, you have permission to grab whatever sharp object is in your vicinity, pluck my eyes out and replace them with M-80s, Itchy and Scratchy style. If you gathered every member of the 1972 Dolphins and threw them all in some sort of genetic cloning facility, the end result would still be less of a man than Ray Mercer. In 1993, Ray Mercer was accused of bribing James Ferguson to throw the fight so Mercer could get a shot at the heavyweight champion at the time, Ridd**k Bowe. Mercer finished his boxing career with a 36-7-1 record which doesn’t include that weird K-1 match with Remy Bojansky where Mercer verbally submits after just one kick from Bojansky.

After his nine-second KO of former UFC heavyweight champion, Tim Sylvia, FightMatrix and their hyper complex mathematical algorithm ranked Ray Mercer as the #14 heavyweight in the world. When Gonzaga was KOd by Dos Santos last month at UFC on Versus, Ray Mercer shot up to #13. With just a 1-0 record in MMA, Ray Mercer is ranked above Cheick Kongo, Jeff Monson, Cro Cop, Pedro Rizzo, King Mo and Gabriel Gonzaga. Actually, Ubereem is ranked just one place above Ray Mercer at the #12 spot.

On April 16th, Ray Mercer will bang against 5-0 Ron ‘The Monster’ Sparks at King of the Cage in Detroit, Michigan (damn, that place still exists?). We’re not sure the speed in which Ray Mercer has to knock out Sparks to maintain his current MMA rank, but if he does, there’s no reason the UFC shouldn’t throw together Ray Mercer vs. James Toney just to prove a forgotten point that no one even cares about. [Source]