Surprise, Mark Pavelich isn’t a fan of M-1 or DREAM

Originally this story was supposed to be published back in October when MMAScrapsradio interviewed Mark Pavelich, the owner of MFC. However, due to my amazing worth ethic and pinpoint accurate timing, I’ll post it on MiddleEasy.com months later and not tell any of you that this actually happened October 9th 2009. It’s old news, but it’s new news to you because it’s never been published. It’s like finding $20 in your jeans, the old you knew you had it in there but the new you just discovered. It’s like a present to your future self.

During the show, Mark Pavelich stated that the Canadian based MFC is really the number two MMA organization in the world and that Strikeforce, Dream and M-1 didn’t have ‘quite the business model he had’. I asked the dude, how could he say that when M-1, Dream and Strikeforce have all entered a co-promotion agreement last summer. Here’s what Pavelich told me:

Tell me how many shows M-1 Global put on? You ever seen one of those shows? Hey Zeus, I got a question for you bro. Name me four fighters that fight in M-1. You can’t. Neither can I! I can’t either. I’m not saying it’s a bad promotion, I just don’t know anyone that fights in that show. It’s like Dream, Jimmy “Sukiakisukiziki fighting Jimmy Tukizikizakizaki and you’re like who? Come on man, Bob Sapp against Sokoudjou? Come on man, I’m not doing that type of stuff. I don’t know if that answered Zeus’ question, but that’s my answer.

Don’t hate things you can’t understand, try to understand it first before you pass judgement and that’s the most important thing when dealing with the Pavelichs. 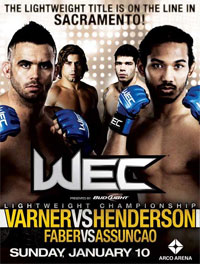 WEC 46 is going down TONIGHT...if you don't have DirecTV
Read Next Post →
Click here to cancel reply.