Heavyweight champion Stipe Miocic is set to square off against one of the toughest challenges to date when he steps into the Octagon to defend his title against knockout artist Francis Ngannou at UFC 220.

Miocic acknowledges Ngannou hits hard but isn’t going to flatter over the Cameroonian’s skills as a fighter, simply because most sluggers in the heavyweight division know how to land a knockout punch.

“I’m excited, man,” Miocic said Wednesday on the Joe Rogan Experience (transcript courtesy of MMA Fighting). “Listen, he’s a good, tough dude. I mean, he can bring the pain. So will I. But unfortunately, I’m not walking out without that belt. I’m still the champ. It’ll be ‘and still.’”
“His power, I guess, but I think everyone hits hard in the heavyweight division,” Miocic said. “I mean, 260-pound men, 250-pound men, you’re not supposed to be hit by something like that. I fought ‘JDS,’ I fought Alistair (Overeem), I fought Mark Hunt. I fought guys who threw hard. And he’s a little wild too, which, that’s tough.”

Stipe Miocic doesn’t try to argue that Francis Ngannou has one-punch knockout power, but says that isn’t any different than anyone at that weight. When Ngannou earns his victory, UFC President Dana White believes that he is the next potential superstar of the division.

Thanks @joerogan for having me on JRE today while I was in town! #AndStill pic.twitter.com/dE4ulEvePg

Miocic will set out to prove his hypothesis and retain his UFC heavyweight title at UFC 220 while Ngannou will once again step in front of a man and try to get him to fall.

“Every guy is different, every fight is different,” Miocic added. “Everyone’s like, ‘Oh my God, his punching power.’ Listen, there’s a lot of guys who hit hard. There’s no question, he does hit hard, but I’m not going to be stupid and put myself in a position where I’m going to get hit.
I’m going to do things that make him feel uncomfortable, and I’m going to do what I’m going to do. I’m not going to sit there and let him do what he wants. I’m going to dictate what I want.”
“He’s definitely gotten better, there’s no question, but we’ll see what happens. Listen, I’m going out there for broke. I’m going out there to win,” Miocic said.
“I’ll find out Jan. 20. I think I’ll be alright. I have the best coaches in the world, I’m pretty confident walking in there. He’s a big dude, throws hard, but that’s every heavyweight. It doesn’t take much.”

Miocic also beat Overeem recently, earn a first-round knockout over “The Reem” last year at UFC 203. Miocic said he will bring different energy and strategy against Ngannou on January 20th.

“I think Overeem really was just kinda being a little sloppy (against Ngannou) and then put his face right in the lane,” Miocic said.
“When I fought him, he was very traditional, moving around, running, but keeping his distance. Like, okay cool, that’s a fight. Then he tried that lunging — I don’t know what kind of kick — to my thigh and I grabbed it and took him down.
But, I didn’t watch the whole fight with Ngannou, but what I saw was he (Overeem) was throwing all these wild punches. When he fought me, he was throwing straights and he wasn’t really [throwing anything wild].”
“I think he’s a great fighter,” Miocic said. “Definitely, he brings it. Hits hard. But unfortunately nothing’s going to change. I’m walking out with the belt still wrapped around my waist. I’m excited for him, he’s going to get his shot. But as long as I’m here, no one’s going to be champ.”

Do you guys think Stipe Miocic will manage to beat Francis Ngannou? 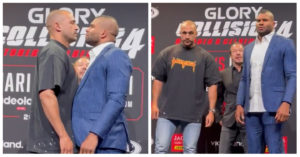 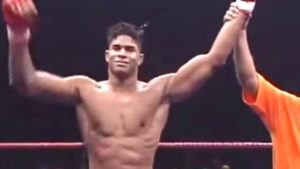