It goes without saying that Stipe Miocic is the greatest heavyweight in the history of the UFC. However it seems that he could now be making the move away from the promotion, after being forced to wait on a third fight with Francis Ngannou.

Miocic lost the heavyweight title in his rematch with Francis Ngannou, getting knocked out in the second round at UFC 260 in March. Despite the pair being 1-1, the UFC decided to forego a trilogy fight, instead opting to book an interim title fight between Derrick Lewis and Cyril Gane, with the winner to face the champ.

This clearly has gotten under the skin of Stipe, as he made clear with some recent activity on Instagram. Singapore-based promotion ONE Championship posted to their account, asking who they should sign next, to which Stipe responded with some thinking-face emojis, suggesting that he was thinking of leaving the UFC behind.

Stipe Miocic Should Not Have To Wait

It seems that the main reason Stipe Miocic is suggesting that he might leave the UFC, is due to feeling disrespected by the UFC. In fact, he said as much with a subsequent comment, in response to a fan who noted that Dana White said he would get the winner of the next heavyweight title fight.

Stipe responded to make it clear that he did not feel like he should have to wait. He says that because they are tied, and because he has the most heavyweight title wins in UFC history, he should have been granted an immediate third fight with Francis Ngannou, citing that Daniel Cormier got an immediate trilogy against him when they were 1-1.

“I shouldn’t have to wait for a winner, I have the most heavyweight title defenses of all time… we’re 1:1 but DC got instant rematches and trilogies against me?” Miocic wrote. 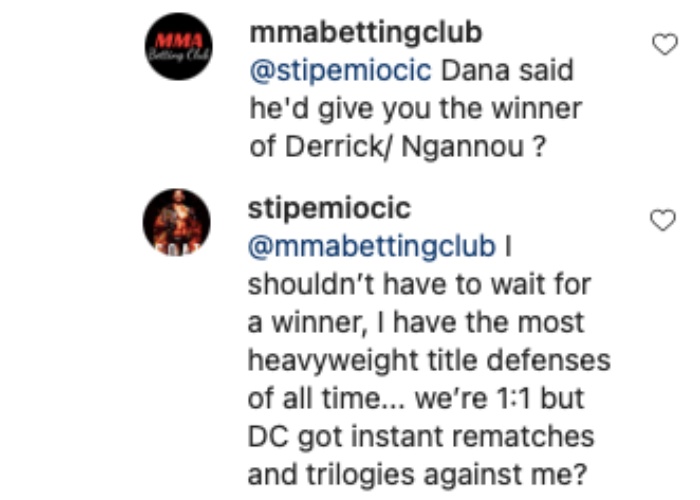 The frustration that Stipe Miocic is feeling is certainly understandable, although there is quite the process between these words on Instagram, and Stipe actually being released by the UFC. Time will tell if things work out for him, but it would be a shame to see arguably the greatest heavyweight of all time leave on these terms.