Before his fight against Alexander Gustafsson at UFC 232, Jon Jones made headlines last month after USADA revealed ‘Bones’ drug test found traces of Turinabol metabolites, that’s the same substance he tested positive for his fight against Daniel Cormier at UFC 214 back in July of 2017. While United States Anti-Doping Agency concluded that’s the old the substances Jones had already been punished for, the reason (NSAC) refused to grant Jones a fight license.

The promotion called over California State Athletic Commission (CSAC) executive officer Andy who said after consulting with multiple scientists and experts; they allow Jones to fight Alexander Gustafsson in the main headliner of UFC 232 from inside The Forum in Inglewood Inglewood, Calif, (which he won) but the condition was that Jones to enrolled in Voluntary Anti-Doping Association (VADA).

According to MMAFighting, VADA did drug tested Jones on weigh-in day before the event and results came back positive again for same metabolites.

Earlier this month ESPN reported that Jones drug test results come back clean for fight night administered by USADA and (CSAC) on Dec. 29, in regards to UFC 232 rematch against Gustafsson.

According to an executive officer, Andy Foster CSAC will not take any disciplinary action against Jones as he already served 15-months of suspension for the original failed test.

“I spoke with the scientists,” Foster said. “They stand by their original statement. Nothing has changed. We’ve already punished Jon Jones for the M3 metabolite, which is a long-term metabolite. There’s no grounds to charge somebody twice for the same violation.”

Jeff Novitzky, a UFC vice president of athlete health and performance, says he’s isn’t surprised as the metabolites popped back in Jones system. Novitzky says experts have informed him that this could be the result of weight cutting and training that triggered the positive results.

“Science-wise, it does make some sense,” Novitzky said. “Once again, there was no parent compound and none of the short- or medium-term metabolites, which tend to stick around for three or weeks. So this is even more indicative that for whatever reason this long-term metabolite is just hanging around in these tissues and they get expressed when you’re going through weight loss.”

Jeff Novitzky also makes sure that Jones wouldn’t be getting a free pass everytime this incident occurs, as a commission will read each case carefully to assure ‘Bones’ isn’t ingesting anything illegal.

“I don’t think it’s a blanket statement that every time that metabolite shows up that it’s automatically considered no re-administration,” he said “They’re looking at a lot of different factors each time it does show up. They’re looking at biological passport information to determine, are any of these other levels suspicious or raising or dropping. They’re looking to see if they can detect any of the shorter or medium term metabolites. It’s not accurate to say that every time this expresses itself in Jon it’s an automatic free pass. They look at it in detail every time it shows up to make sure that everything is consistent with no re-administration and no performance-enhancing benefit.”

Jon Jones who’s scheduled to face Anthony Smith at UFC 235 pay-per-view (PPV) event on March 2, 2019, ordered to appear before (NSAC) on Jan. 29, 2019, to answer why trace amounts of Turinabol still showing up in his system. 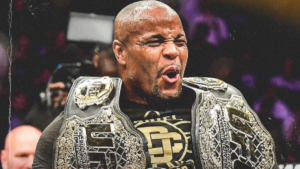 Daniel Cormier Recounts Rivalry With ‘Cheater’ Jon Jones: ‘You Did Some Stuff To My Career That Never Let Me Settle’