Before any of you start throwing poisonous darts and swinging halberds towards my neck region, Hector Lombard is coming off the Frate Trane list. Also, shame on any of you that have been insisting that it’s spelled ‘freight train.’ Look, I have no idea what those words mean. You have a better chance communicating with me in Arabic. The concept of ‘pound-for-pound’ does not exist. The MMA universe operates on a physical law of the ‘Frate Trane.’ Nothing else in this world even matters.

You’re probably still feeling the aftershock from this past weekend at UFC 149 when Hector Lombard was split-decisioned by Tim Boetsch, effectively igniting Lombard’s Frate Trane in a fiery explosion of ‘Dude, WTF?’ We know it was a boring fight, and we know the MMA world thinks that Hector should move down in weight. Well, jokes on you. Lombard doesn’t plan on doing it, as evidenced by this recent Tweet from the former Bellator middleweight champion. 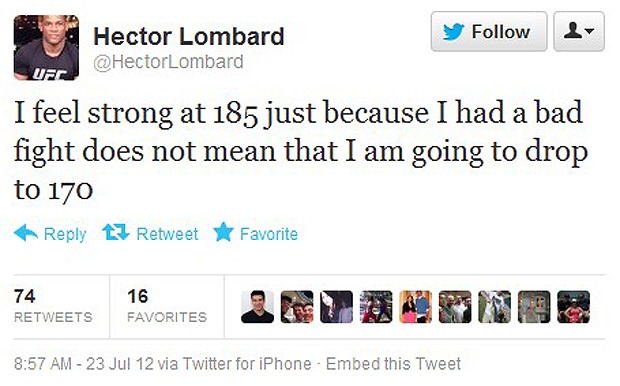