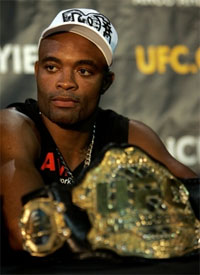 After the chaos that ensued at UFC 112, our buds at Head Kick Legend wrote an article on how Prince’s ‘Purple Rain’ is synonymous to Anderson Silva’s performance against Demian Maia. It’s an interesting read that fully justifies why Anderson Silva is too ahead of his time to be comprehended by modern day MMA fans. In short, you would need to equip a Delorean with a flux capacitor set to 1.21 gigawatts to fully appreciate The Spider’s artistry.

In an interview with Rover Radio, Anderson says that even though Dana is attempting to establish a match between arguably the two best pound for pound fighters in the world, Silva wants nothing to do with it.

“I don’t think a fight with GSP [George St. Pierre] will ever happen. It’s not a fight I want to have and I don’t think GSP wants it either.”

I’m sure you don’t understand Anderson Silva’s motives, neither do I. But as our bud Dave Walsh put it: “Anderson Silva will never be what you want him to be and chances are, you can’t understand what goes on in his head. Don’t bother trying”. [Source]

Here's that insane Zoila Frausto KO everyone is talking about
Read Next Post →
Click here to cancel reply.