I still have this video of Frank Shamrock grabbing Miesha Tate by her neck and pushing her into a corner that no one has even watched. Maybe I’ll put it on YouTube later today and sit back while the internet creates message boards threads like ‘Dude, Frank Shamrock really hates Miesha Tate!’ We all know Miesha Tate is the reason why your girlfriend looks at your Firefox browser history when you’re asleep at night. The inner frat guy in me wants to say ‘If you haven’t seen Miesha Tate rock her patented tight shorts in a cage, I suggest you hit up Youtube’ but the sheltered feminist wants to say ‘How the hell did I get inside this body. Someone let me out.’

Folks, there’s a reason why we’re still talking about Miesha Tate vs. Julie Kedzie from last weekend’s Strikeforce card. The bout was crammed with enough awesome to make one’s head spontaneously combust in a poison cloud that will do an enormous amount of damage to anyone that walks in the vicinity. Yesterday, Miesha Tate tweeted a picture of an orchard of raspberries, blueberries, and schnozberries that exist entirely inside of her lip due to a well-placed elbow from Julie Kedzie. Check it out below. 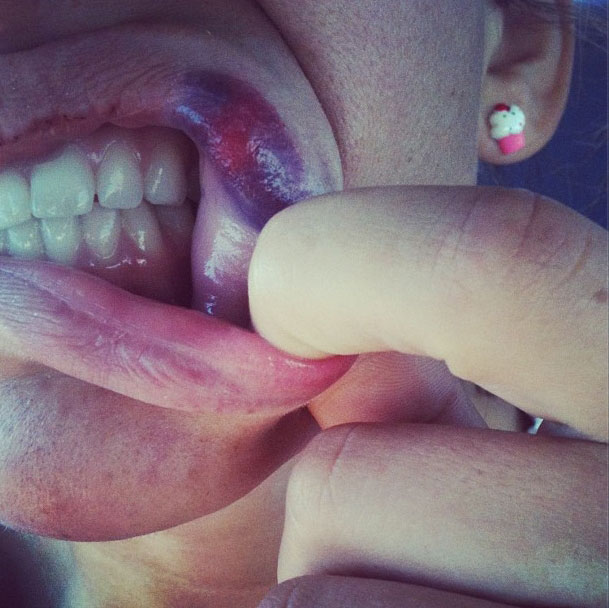 Ovince St. Preux talks about how an In-N-Out burger nearly messed up his training for Strikeforce
← Read Last Post

Watch Josh Barnett attempt to do math, talk women's MMA, and give music suggestions in this video
Read Next Post →
Click here to cancel reply.