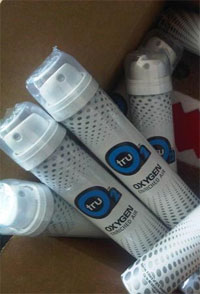 Recalling his fights on the heavyweight season of TUF, Matt Mitrione’s cardio has come a long way. I know, it’s a shocking revelation, but after UFC 119, ‘Meathead’ proved that with enough training, anything is possible (including building up enough lung capacity to make it through all three rounds of a heavyweight fight against an much more experienced fighter in Joey Beltran). His performance moves him one step closer to the UG’s coveted ‘frate trane’ status (and yes, that’s spelled correctly).

It’s been over a month since we broke the news that the Texas State Athletic Commission allowed a foreign substance into the cage at Strikeforce Houston. Several MMA events have gone down in Texas since then, including Shark Fights and even a UFC Fight Night, yet none of their respective participants have used oxygen canisters since we brought the issue up. Either the commission read their own list of approved ringside items and realized that canned oxygen is (still) not on their list, or every other ringside physician besides the one overseeing Strikeforce: Houston decided not to approve the fighters choice to use it.

We continue to get boatloads of questions and criticisms about our ‘Oxygengate article’ so we decided to re-open the door on this topic one last time. Some critics have insinuated that we basically called KJ Noons and King Mo Lawal cheaters, which we never did. We merely questioned an athletic commission that didn’t follow it’s own rules or bother to drug test their fighters in an all-around strange night of MMA. The TSAC continue to insist they did everything by the book, and anyone who questions them is wrong. That’s ballerish. Mike Chiappetta actually did a great writeup that documents the TSAC dismissing the possibility that canned oxygen offers any performance benefit. However, as a responsible journalist and MiddleEasy’s unofficial crash test dummy, I took it upon myself to test it out and conduct a series of controlled experiments to see what Tru O2 actually does.

I followed all the product instructions that came with my box of canned oxygen, taking ten puffs before, during, and after my workout and I can assure you that while the benefits of using Tru O2 may vary from person to person, it definitely gives athletes a performance advantage. Not only could I eat more tacos, and recover faster in between keg stands at block parties, but I also felt the difference in my cardio while cycling up inclines that I often struggled through without it. At the peak heart rate of my workout, ingesting canned oxygen (as instructed) considerably calmed my breathing down. After an entire season of conditioning, I’m in good physical shape, but using Tru O2 gave me the ability to work harder & recover from interval training between 20-25% faster. Since the folks at Oxygen4Energy were nice enough give us oxygen to hand out, I also gave cans to two local muay-thai fighters preparing for matches (which they both coincidentally won this past Friday). I noticed the majority of the difference during my workout, but they seemed to notice faster post-workout breath recovery. It takes a few cans to get used to the effects, and the fighters made it clear they didn’t want to get accustomed to using something they can’t inhale during their fights. When asked if they would use the product again if it were legalized in New York State, both fighters said yes without hesitating.

Since most states do not allow canned oxygen ringside, amending those rules could potentially make for more exciting fights by eliminate the problem of early-onset fatigue, which contributes to lackluster performances. Fighters would still have to worry about cardio in a training camp, but it could certainly take some of the anxiety off during a fight’s later rounds. The moral of the story remains that whether or not the Texas State Athletic Commission knew what they were doing or not, allowing a fighter to use canned oxygen while his opponent doesn’t makes for an unleveled playing field. A fair sporting contest means both fighters compete with all the under the same conditions and with the same performance restrictions. But that’s just our opinion…It’s not like we’re the ones looking out for peoples’ safety during a sporting contest.

In conclusion, we’ll let Renzo Gracie give you his final thoughts on canned oxygen and with that, we’re officially done kicking this dead horse.