So MiddleEasy covered Cage vs. Cons this past weekend…

Cage vs. Cons is the closest thing the world has to Running Man. For those that weren’t fortunate enough to be born into a generation in which your life was defined by a series of Arnold Schwarzenegger movies, ‘Running Man’ is a film that depicts convicts in tight, colorful outfits fighting for their freedom. Actually, that’s about all I remember from that movie. There was also some guy with a chainsaw called ‘Iceman’ along with an Asian guy with a mask. In retrospect, those two descriptions could be of the same person. According to IMDB, the storyline of the film sets the country in a futuristic totalitarian society where the judicial system has decided to go with violent forms of entertainment to bring justice on convicted criminals. In the film, convicts wear outfits and have to literally run to freedom inside a gauntlet filled with deadly obstacles — like overweight guys with flamethrowers and chainsaws. The entire event is hosted by a guy who eventually double-crosses the protagonist, and it leads to some pretty obvious plot holes. The Running Man was Richard Bachman’s 1982 depiction of America in the year 2025. Cage vs. Cons happened this past weekend, and it seems like society is making progression in the right direction.

The novelty of Cage vs. Cons is in the fact that ex-convicts are pitted in the cage with other individuals who have not been placed in a correctional unit. The MMA card featured a total of ten fights with the main event being a 40-year-old ex-con versus a Los Angeles Police Department officer, Ismael Gonzalez. It’s like something that would happen in an episode of Star Trek if the universe was reduced to cage matches filled with irony. Cage vs. Cons was also coupled with a fully autonomous hip-hop show with the likes of Brooklyn Zu, Ras Kass, Shabazz The Disciple, Gravediggaz, B-Real from Cypress Hill, Killah Priest, Too $hort, E-40 and Los Angeles based Psycho Realm. Within the arena was a potpourri of vendor booths which each merchant selling their unique service and (or) product. Judging from the flyers that I received at the event, affordable bail bonds seemed to be a hot commodity inside the Los Angeles Memorial Coliseum and Sports Arena. Good marketing, at least these guys catered to Cage vs. Cons’ target audience. Some other notable vendors were MMA sponsor ‘Serious Pimp’ who had the infamous Bishop Magic Don Juan on display and a clothing company called ‘Something, something [expletive]’ that had an in-house pole dancer that made her father proud for upwards of two consecutive hours. The name of the company was etched on her shorts, but due to the fact that the dancer was unable to prevent her butt from bouncing, it was impossible to take a clear, identifying picture. This was the best I could do, and I’m sure you guys are perfectly fine with it. 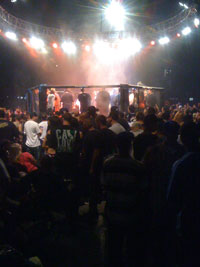 When we arrived from Hollywood to South Central Los Angeles for Cage vs. Cons, we noticed we were surrounded by a lot of guys scalping tickets to the event. In reality, the first thing we noticed as we walked to the event was the insurmountable amount of guys walking around with head tattoos. If the number of head tattoos served as an accurate representation of the amount of times Kristin Kreuk thought about me over the weekend, then whatever number the total is — it’s absolutely correct. Myself, LayzieTheSavage and model Jessica Dawn (you can follow her on Twitter) made up the entirety of the MiddleEasy crew for this event. There seemed to be an incredible lack of MMA media at the show and an elevated presence of guys that could easily play central villains in Oz. Most of my MMA industry buddies in Southern California told me prior to the event that they would not be covering Cage vs. Cons simply because they feared for their own safety. Can’t blame them. Throughout the entire duration of Cage vs. Cons, I had a legitimate fear that I would be shot in the back of the head. Perhaps calling it ‘legitimate’ is a bit strong, more along the lines of extreme paranoia. The only media that braved the expanse of South Central Los Angeles other than MiddleEasy was Erik Fontanez from MMA Weekly and Steven Morocco of MMA Junkie. We huddled together as often as possible in order to protect our own numbers, like a pack of wildebeests on the savannah. The line to get in to the arena reached out across nearly half the parking lot and a steady stream of people were entering the grounds through a small opening in the fence gate. We used this same opening to leave the premise when we were finished. That fence seemed to be a hot travel destination.

Cage vs. Cons is perhaps the only MMA show in which a metal detector was appropriately located at the end of the red carpet. At one point, police nearly stopped the entire event because there wasn’t enough security at the entrance. Once inside the facility, we had a tough time trying to decide exactly what to do. LayzieTheSavage managed to talk to a few celebrities on the way in, but I had a burning desire to finally see Killah Priest perform live, so I rushed down towards the hexagon. Since this is an MMA website, I’m not going to emphasize how much the ‘Heavy Mental‘ album influenced my mundane upbringing and how during the set, I repeated every lyric of B.I.B.L.E and From Then Till Now with absolute precision. Once a few acts were done, we worked our way up to the top of the stands where things were slightly safer and met up with Erik Fontanez. We both noticed that from our vantage point, fumes of smoke were sporadically rising around the cage. There wasn’t a smoke machine, folks. The place was literally ‘up in smoke’. It looked like the aftermath of a forest fire entirely localized in the confines of an arena. Cheech and Chong would have been proud. 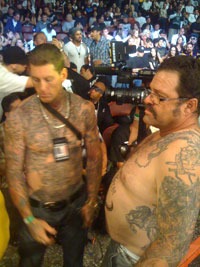 Erik told me the press would be escorted to the cage at around 7:00pm, so we opened up our laptops and pretended to do work to kill some time. Armed with our blue bracelets (of power), we eventually wandered down to the cage to find our spots. There was no escort. In fact, the entire press set-up was drowned in confusion. At first we were told that we would be sitting in the rafters, then we got a second opinion like a patient whose doctor told them they were stricken with incurable cancer. Another member from the Cage vs. Cons staff told us to ‘hang around’ until he knew what was going on. Steven Morocco managed to locate us in the whirlwind of confusion and we patiently stood there while the production crew haphazardly worked to get the cage ready for the MMA portion of the show. We ended up talking to George Dodd of the CSAC regarding the crowd that amassed inside the arena. Needless to say, the place was packed. More so than the majority of Strikeforce events that I’ve attended in the past. Cage vs. Cons had an endemic audience that were drawn to the event based on the hip-hop show and stayed to see convicts fight in a cage. Stellar combination. Also, the shirtless and tattooed press at the event was a nice touch.

As we were talking, a barrier was being erected around us and we just so happened to be located inside orange gates that were placed behind us. ‘Excellent’ we thought. If there was a shooting, we would be trapped inside and would be forced to cower under a table like an infantile pacifist. ESPN’s Josh Gross told us that if a riot does in fact break out, being around the cage is a rather safe place to be. Erik and I roamed the perimeter in an attempt to find somewhere, anywhere, to sit down. A staff member from Cage vs. Cons told us they were out of seats, but we could use a giant speaker as both a table and a bench. We were cool with it because we secretly knew the speaker would also double as a near impenetrable object to hide behind if shots were fired. We set up our equipment, the lights went off (which isn’t a good idea when you have thousands of Los Angeles ex-convicts who have been drinking all day), and the show started.

Deebo from Friday was the announcer for the event. Wait, maybe you guys forgot what you just read. It bares repeating. Deebo from the movie Friday was the announcer for Cage vs. Cons. In fact, when he wasn’t announcing in the cage, he sat right next to us. So did this chick. Of course, Cecil Peoples presided over the entire card. Before each bout, Deebo would tell the audience what crimes the convict was charged with and depending on the severity of the crime, the audience would cheer. Like most local fights, each bout started with an aggressor throwing a few punches to set-up the takedown and eventually ground-and-pound to a win. The most notable fight on the card was between two heavyweights, which turned out to be a Griggs-like slug-fest. In the main event, the crowd heavily booed and cursed the LAPD officer, Ismael Gonzalez, while the ex-convict, Rick Slanton, walked out to a standing ovation. In this Robocop-like scenario, it was the LAPD officer who ousted the criminal and won via a clean, one-punch knock-out.

Some people proclaimed Cage vs. Cons would set the sport back. The truth is, MMA is so young that it can’t be set back. We talk about the ‘old Pride days’ like they’re from some nostalgic era marked with sepia photos and copper trinkets. People, Pride was around in 2007. That’s just four years ago. MMA is an entity that has been evolving since Chuck Liddell was competing in vale tudo matches in Brazil (and well before that). No one knows where this thing is going to go. We’re just all riding atop one very fun and entertaining wave. To discredit Cage vs. Cons for assembling a hip-hop show coupled with an ex-convict themed MMA card and marketing it to ex-convicts is highly naive. For all we know, the creators of Cage vs. Cons just introduced the sport that we love to an entirely new audience. At the end of the day, a packed audience inside the Los Angeles Memorial Coliseum and Sports Arena yelled and cheered for MMA — and that’s always good for the sport.

Now check out this snazzy video of the event filmed by LayzieTheSavage.