So Mayhem Miller is on G4’s American Ninja Warrior… 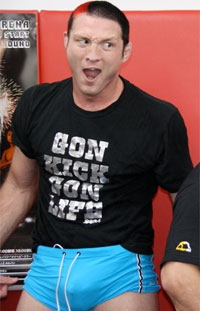 Jason ‘Mayhem’ Miller announced via Twitter that he’s going to be in an upcoming episode of G4’s American Ninja Warrior. If you’re still getting used to the various twits and twats people have been addicted to this year, then I suggest you sign up, then follow us…then eventually follow Mayhem Miller. He’s a pretty inspirational dude, especially if you’re looking for methods to remove ringworm from your elbow at 3am in the morning. After announcing he’ll be a contestant on American Ninja Warrior, Jason also broke the news that:

If I was named “Kennedy” I would never want to ride in a motorcade- even to my grave.

Lesbian couples are the same as hot straight couples- one I would bang, the other I wouldn’t.

You don’t have vagina, but I still love you.

'Fedor hasn't felt the power that he's about to get' - Rogers
Read Next Post →
Click here to cancel reply.